The development of the seventh series of banknotes was driven by a need for additional security, but also by the increased use of ATMs and vending machines.

Requirements for machine processing set limits for the artistic design. New security features such as a holographic strip, fluorescent effects and iridescent print were introduced. The 200-krone note was added. The introduction of different sizes both in length and height made it easier to distinguish denominations, especially for people who are blind or visually impaired. The name of the Bank in Norway’s two official written languages, NORGES BANK and NOREGS BANK, appeared on the obverse and reverse sides, respectively. The portraits were to be of famous personages in science and culture, and at least two were to be women. The obverse sides were designed by the graphic artist Sverre Morken and the reverse sides by the graphic artist Arild Yttri.

Reverse: Water lilies in a forest pond, inspired by the folktale A Summer Night in Krogskogen 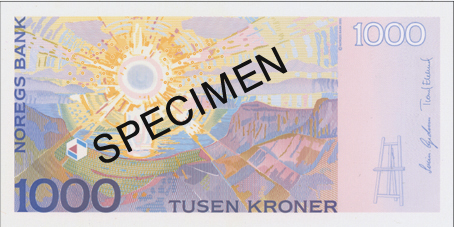