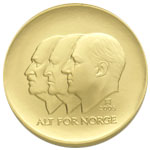 The coin series is comprised of three gold and three silver coins. The first two coins, one gold and one silver, were issued on 27 November 2003, to commemorate the day in 1905 when King Haakon VII took his oath in the Storting.

The next two coins were issued on 23 September 2004, to commemorate the day in 1905 when Norway and Sweden came to an agreement in Karlstad regarding a peaceful dissolution of the union.

The last two coins were issued on 7 June 2005, the centennial for the Storting resolution which resulted in the dissolution of the union.

The coins were issued in cooperation with Hundreårsmarkeringen - Norge 2005 AS (Norge 2005) (The Centennial Celebration - Norway 2005 Ltd.). Norge 2005 is also responsible for marketing and sales of the coins.