This commemorative silver coin was issued to mark the 200th anniversary of Henrik Wergeland’s birth. The coin was part of nationwide celebrations in 2008, which were organised by the National Library, the National Archives and the Eidsvoll 1814 Foundation. 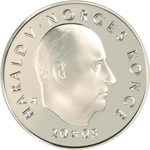 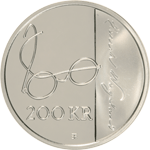 The silver coin has a nominal value of NOK 200 and was minted in an issue limited to 40 000 coins. Actual number issued was 29 646 coins. The coin, which is proof quality and legal tender, was put into circulation on 8 May 2008.

The coin’s reverse (tails side) depicts Wergeland’s characteristic glasses and signature. A jury selected the winning design, which was created by Enzo Finger. Commenting on the design, the jury said the following:

"The design is both simple and modern. The artist has used a single symbol (Wergeland’s glasses) and the poet’s characteristic signature. The glasses represent Wergeland’s intellect and creativity. Folded, they symbolize the past and a completion, as does the signature. The glasses are also folded in the shape of the figure “200”, providing a link to the anniversary itself. The surface of the coin is divided into two sections, one of which is designed to give the illusion of a billowing sheet of paper.”