2014 was the bicentenary year of the signing of the Norwegian Constitution by the Constituent Assembly at Eidsvoll. To mark this important event in Norway's history, Norges Bank issued a 20-krone special edition circulation coin on 16 February 2014. The coin is legal tender and was issued at face value. 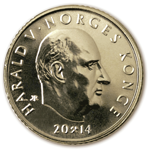 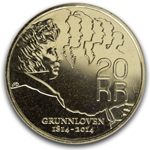 The commemorative coin issue was a collaboration between Norges Bank and the Storting's bicentenary organising committee. The aim of the bicentenary celebration was to raise awareness of what the Constitution means today and its importance for the development of democracy in Norway, to encourage participation and involvement in democratic institutions and to be an occasion for popular celebrations throughout Norway.

The anniversary motif on the coin's reverse was designed by the painter and illustrator Esther Maria Bjørneboe. The motif features Christian Magnus Falsen, in front and in profile, resting his gaze on successive, future generations of women, men and youth. They are portrayed in simplified profile, and symbolise the Norwegian Constitution's long history and the numerous modernisations it has undergone. The coin's denomination (20 KR) is placed to the right, with the text GRUNNLOVEN 1814 – 2014 (Constitution 1814-2014) at the bottom. At the lower left on Falsen's lapel, the artist's signature (EMB).

20-krone coins in the standard design were not issued in 2014.