The 75th birthdays of the King and Queen. NOK 200-krone commemorative silver coin issued in 2012

Their Majesties King Harald V and Queen Sonja both celebrated their 75th birthdays in 2012. To mark the occasion, Norges Bank issued a commemorative silver coin.

The King and Queen were married on 29 August 1968 in Oslo Cathedral and have two children, Princess Märtha Louise and Crown Prince Haakon. 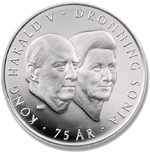 The coin has a nominal value of NOK 200 and was minted in an issue limited to 40 000 coins. The silver coin, which is proof quality and legal tender, was placed into circulation on 21 February 2012.

The silver coin's reverse (tails side) was designed by Ingrid Austlid Rise, designer at Det Norske Myntverket AS (Mint of Norway). Motif: The coat of arms of Norway with the royal crown. Inscription: KONGERIKET NORGE, issue year and denomination. The crossed-pick-and-hammer mintmark of the Royal Norwegian Mint (now Mint of Norway) is flanked by the issue year and denomination.