Norges Bank’s foreign exchange transactions on behalf of the government

The Norwegian government receives revenues in both NOK and foreign currency from petroleum activities. Some of these revenues are used to finance a planned central government budget deficit. Norges Bank carries out the necessary foreign exchange transactions associated with petroleum revenue spending. These foreign exchange transactions are planned and smoothed over the year and are pre-announced each month.

Every year the government uses revenues from petroleum activities to finance a planned central government budget deficit, referred to as the non-oil budget deficit. This means that the central government budget is set up with a deficit with oil revenues excluded, and all government revenues from the petroleum sector are transferred for accounting purposes to the Government Pension Fund Global (GPFG). Subsequently, the deficit is financed by reversing funds from the GPFG. Petroleum revenue spending is governed by a "fiscal rule", according to which over time, oil revenue spending shall equal the expected real return on the GPFG, which is estimated at 3 percent [1].

In line with the fiscal rule, this inflow is to be saved in the GPFG, while funds are withdrawn from the GPFG to finance the structural non-oil budget deficit. The revenue and income streams are in both NOK and foreign currency, and they are spent in NOK via the government budget or saved in foreign currency in the GPFG. Norges Bank has been tasked by the Ministry of Finance to carry out the necessary currency transactions associated with the petroleum fund mechanism [2], to ensure enough NOK to spend and/or enough foreign exchange to transfer to the GPFG.

Norges Bank's foreign exchange transactions are planned and smoothed over the year and pre-announced in a press release each month so that market operators know the amounts to be converted.

For more information about how Norges Bank estimates the necessary foreign exchange transactions and the use of the PBP, see: 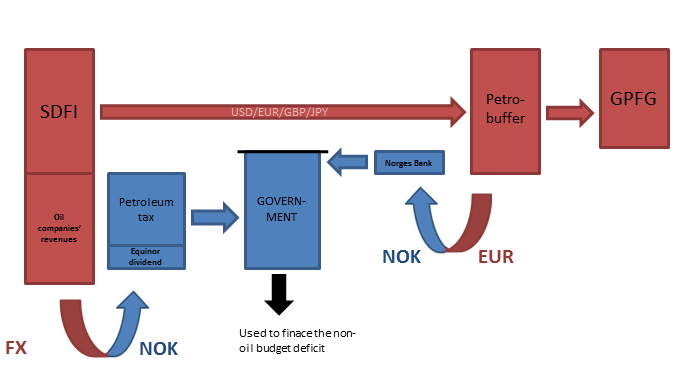 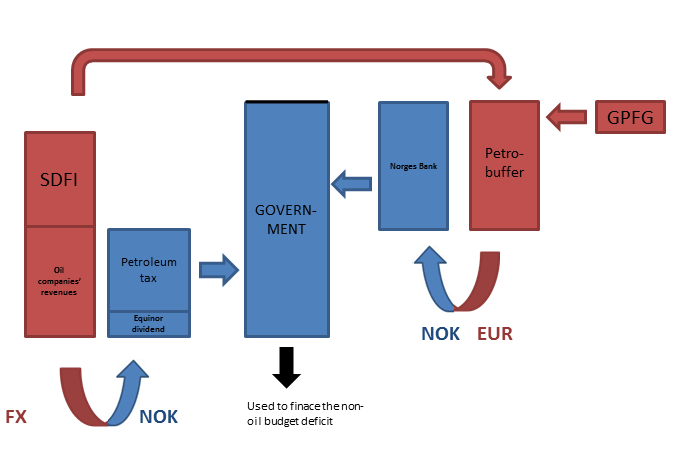 Quarterly inflows into and outflows from the petroleum buffer portfolio.*In millions NOK.

*A positive number indicates a net inflow into and a negative number a net outflow from the petroleum buffer portfolio.

**Market value at the end of the quarter deviates somewhat from net cash flow because market values change over the course of the month.

Holdings and inflows into the buffer portfolio are published in the quarterly report on the management of the Bank's foreign exchange reserves.

Daily purchases of foreign exchange in millions of NOK: