In its forecasting and stress testing work, the Bank uses a suite of models: two macro models and three models utilising micro data from enterprises, households and banks. The household and enterprise models analyse credit risk for their respective markets. The bank model is based on the forecasts from the macro model for stress testing and projected developments in credit risk from the micro models. The results are used to forecast bank profits and capital adequacy. In addition, the Bank has a macro model for financial variables that is linked to the monetary policy core model. This model is used to project baseline scenarios in the Bank’s stress tests and the Financial Stability reports.

Stress tests are useful because they can help Norges Bank to evaluate low-probability events with potentially far-reaching impacts on the economy. Severe shocks to the economy and the financial system are rare. When these shocks do occur, they are most often not the same ones that precipitated the previous crisis. Stress testing can assist the Bank in exploring the possible consequences of the various risk factors identified in the Financial Stability reports. Stress tests are also useful because they can provide information about the way various risk factors interact and the vulnerability of Norwegian banks to shocks.

Stress testing at Norges Bank is in the form of macro stress tests. This means that Norges Bank projects banks’ accounts and analyses their vulnerability. As the Bank does not have an overview of banks’ individual positions, it does not have a detailed picture of a particular bank’s risk exposure. On the other hand, macro stress tests ensure consistency in the assessment of individual banks. In addition, the risk assessments’ overall perspective may serve to provide a more accurate picture of macro risk in the banking system. Stress tests conducted by central banks are normally macro stress tests. In other instances, often when stress tests of individual banks are to be published, bank-level stress tests are performed. This means that banks perform internal stress testing under a macro scenario devised by the supervisory authorities.

The suite of models comprises a small macro model and three models utilising micro data from enterprises, households and banks. The forecasts in the latest Monetary Policy Report are used as the baseline scenario. The macro model is used to project financial variables given the Monetary Policy Report forecasts and to draw up a stress scenario that is then fed into the three micro models (see Chart 1). The household and enterprise models analyse the credit risk for their respective markets. The bank model is based on the forecasts from the macro model and risk developments in the enterprise model. The bank model forecasts bank earnings and capital adequacy.

Chart 1. Structure of the suite of models 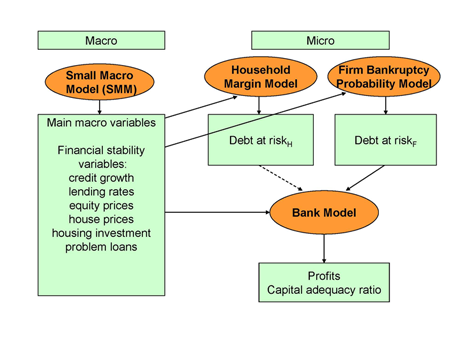 Banks are exposed to a number of different risks. Some occur at the micro level, such as heavy losses in single industries or sectors. Others are due to negative macroeconomic performance. The bank model can be used for stress testing of both micro and macro risks.

The bank model forecasts the accounts of the six largest Norwegian banks over a three-to-four-year period. These banks represent over 60 per cent of total assets in the Norwegian banking market. The bank model has three main components: income statement, balance sheet and capital adequacy ratio (See Chart 2). 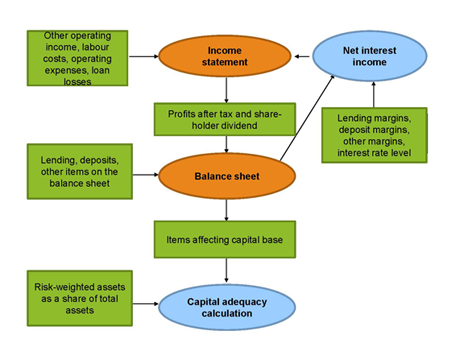 The income statement and balance sheet are mutually dependent. Bank earnings after tax and dividend directly affect bank equity, a balance sheet item. At the same time, net interest income, which is recognised in profit and loss, will be determined by the performance of the balance sheet items deposits, loans and other interest-bearing assets and liabilities.

Forecasts from the macro model determine corporate and household credit growth, lending rates, deposits, labour costs and loan losses. The sector breakdown of loan losses is determined by the forecasts from the enterprise model. This is important as banks differ in their sector exposure and will not suffer the same impact from a particular shock. Banks’ commission income is estimated using GDP, yield spreads for five-year government bonds and the three-month money market rate.

This model has been developed to assess credit risk associated with bank loans to Norwegian enterprises. Estimates in the model are based primarily on enterprise accounts, and the model provides sector-specific probabilities of default. The model employs results from the macro model to project enterprise accounts.

The household model estimates household financial margins defined as their income after tax, less basic consumption and interest payments. In the stress analyses, the components of household margins are forecast from the macro model's results. The results are included in the assessments of household vulnerability to crises.

Historically, banks’ losses on loans to households have been limited. On the other hand, household demand for goods and services is important for firms’ earnings and debt servicing capacity. Furthermore, household savings in the form of bank deposits are important for banks’ ability to fund lending. The household model’s results are not fed directly into the bank model, but a crosscheck is performed to ensure consistency between the two models.

4. The macro model – including a financial accelerator

The Bank has developed what it calls its small macro model (SMM) to ensure consistency in stress scenarios and to see the effect of specific kinds of stress impacts in the macroeconomy compared with the baseline scenario.

The macro model used in stress testing is an estimated equilibrium adjustment model of the Norwegian economy. The model contains variables that are important for financial stability such as house prices, household and corporate credit growth and banks’ problem loans. It has backward-looking expectations, but contains a variable for household expectations.

In the SMM the Bank has modelled the interplay between house prices, household credit and GDP and between market capitalisation, corporate credit and GDP. Most bank loans to the retail market are secured on dwellings or corporate assets. Higher house prices and market capitalisation push up collateral values and lead to higher credit growth. Credit growth, which can be used for investment or debt-financed consumption, stimulates economic activity, employment and income growth. This further pushes up house price inflation, market capitalisation and indebtedness. Thus, housing, equity and credit market shocks will have repercussions in the real economy. This transmission and amplification mechanism is known as the financial accelerator.

In addition to the SMM, the Bank also uses a macro model for monitoring financial stability. The stress test baseline scenario is derived from this sub-model, which projects variables that are important for financial stability. The projections are conditional on the projections for the Norwegian economy from Norges Bank’s core model for monetary policy analysis (NEMO).

The objective of stress testing is to analyse the impact of potential shocks to the Norwegian economy and Norwegian banks. Based on one or more of the risk factors identified in the Financial Stability reports, the scenarios will vary over time. In financial system oversight, risk factors that are highly improbable but have serious repercussions for the economy and the financial sector can easily be overlooked. Stress scenarios therefore apply shocks that would have severe adverse consequences if they were to occur.

The depth of scenarios, i.e. how severe they are, will vary as a consequence of changes in the risk factors. At the same time, projections for the baseline scenario and the uncertainty surrounding these projections will have an impact on stress scenarios. In a downturn where economic developments are highly uncertain and where risk factors can have serious consequences, the impact shown in the stress test may be considerable.

Norges Bank has developed a system of macro models for policy analysis and forecasting. This system consists of a core model and a number of associated sub-models. In addition to the stress testing model, Norges Bank Financial Stability uses a sub-model that addresses factors of particular importance for monitoring the financial system. This sub-model employs estimated relationships in order to forecast variables relevant to financial stability. The forecasts are based on projections for the real economy in the most recent Monetary Policy Report.