Old banknotes will be worthless

The banknotes in the previous series – Series VI – will soon be worthless. Many banknotes in this series are still in circulation. Norges Bank will no longer be obliged to redeem these notes as from 1 November 2012.

“Check whether you have old banknotes hidden away at home”, says Director Trond Eklund of the Cashier’s Department. The deadline for exchange is 1 November 2012 and applies to the following banknotes: 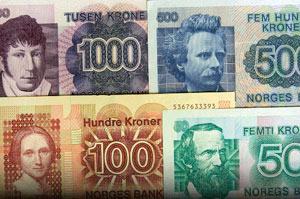 If you want to exchange any of these notes, you must do so before 1 November at one of the following locations:

More information about exchanging old banknotes and coins is available on our website.