Design of Ole Bull coin has been selected

The 200th anniversary of the birth of the Norwegian violinist Ole Bull will be celebrated in 2010. To mark the occasion, Norges Bank will issue a 10-krone special edition circulation coin.

A competition was held for the design of the coin’s reverse and six artists were invited to take part. The winning design was created by the sculptor Wenche Gulbransen and features Ole Bull’s portrait fused with a sheet of the music and lyrics of “Seterjentens søndag”, one of Bull’s most famous compositions, his name and the anniversary year. Minor changes may be made to the design before production.

The obverse of the coin features the portrait of H.M. King Harald V as shown on other special edition circulation coins in recent years and was created by Ingrid Austlid Rise, designer at Det Norske Myntverket AS (Mint of Norway).

The coin will be issued as part of the Ole Bull 2010 project established by the Art Museums of Bergen foundation. Organisation of the anniversary celebrations was delegated to the foundation by Bergen municipality.

The 10-krone coin will be issued in connection with the launch of the anniversary celebrations in February 2010 and photographs of the minted coin will then be released. 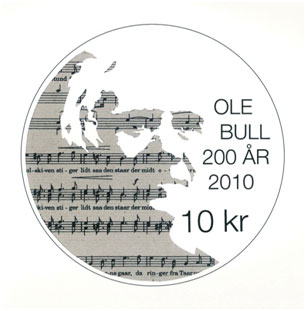