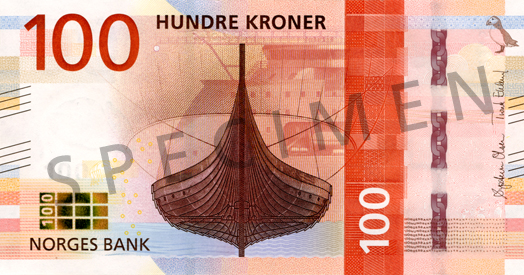 The primary motif on the 100-krone note is the Gokstad ship, which is Norway's largest preserved Viking ship. The ship was built around 900 AD and was found in a burial mound in 1880. In the background you can vaguely see a Norwegian bow design, X-BOW®, belonging to Ulstein Design & Solutions AS.

These different vessel designs together suggest that the ability and desire to find new and better ways of movement have always been essential for coastal Norway and the country's business sector.

In the Viking Age, in vessels like the Gokstad ship, one could sail along the entire coast and abroad for trade, piracy, battle or colonisation. Today, the Viking ship gives us the opportunity to travel in completely different ways. We can sail into the past and live vicariously in the world of our ancestors.

As Norwegians we carry with us a long and rich history of surviving along the coast and out at sea to fish, trade and transport goods – from Saga Age merchants to today's international shipping companies. 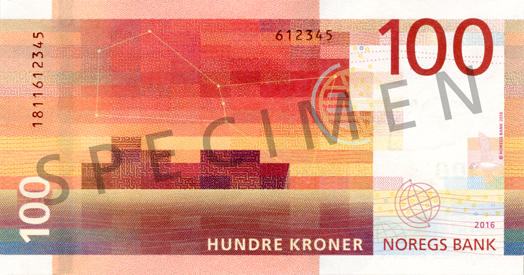 In the pattern on the 100-krone note you can vaguely see a cargo ship on the horizon. There is a gentle breeze, symbolised by rectangular forms that are slightly longer than those on the 50-krone note.

The waves in the organic pattern begin to crest. A globe and parts of the constellation Orion are also visible.

Shipping lanes were long crucial for Norway, not only for those who lived along the coast. Via inland waterways, goods from the entire country were transported to the coast, and from there, to other parts of the country and abroad. From near and far, other goods came in return.

Today, shipping and maritime industries are also important drivers of the Norwegian economy. Most of the imported goods that we purchase are still transported by boat.