Norges Bank's letter of 12  September 2008 to the Ministry of Finance.

We refer to the Ministry of Finance's letter to Kredittilsynet (Financial Supervisory Authority of Norway) of 27 June 2008.

On several occasions, Norges Bank has pointed out the need for a broad-based review of the guarantee fund scheme, including in a letter to Kredittilsynet dated 30 September 2004. The current scheme poses a considerable moral hazard. Membership of the Banks' Guarantee Fund is especially attractive to banks that are experiencing a clear deterioration of their financial situation. Banks with operations in more than one country may find it profitable also to fund the international portion of their portfolio with growth in deposits in their Norwegian branches. The incentives to do this have been particularly strong in recent years, since no contribution has been charged for membership of the Guarantee Fund. Banks are now bidding up the interest rate on deposits. Over time, this will also have an impact on lending rates.

The current problems in the banking industry in other countries brings to the fore the issue of changes to the Norwegian deposit guarantee scheme. In this letter, we wish to focus on the guaranteed amount, size of the fund, guarantee fund contributions and treatment of branches.

In Norway, deposits of up to NOK 2 million are covered by the deposit guarantee scheme. This is far higher than in most other countries. EU rules set a minimum guaranteed amount of EUR 20 000. Of the other Nordic countries, Denmark has the highest limit, DKK 300 000. In the UK, the limit was recently raised to GBP 35 000, with proposals for a further increase to GBP 50 000. Other EU countries generally have lower limits, except for Germany, where commercial banks have a separate voluntary arrangement that features a high guaranteed amount combined with mutual surveillance of risk exposure. A guaranteed amount of NOK 1 million, as Norges Bank recommended when the current Guarantee Schemes Act was introduced, will reduce the undesirable effects of the Norwegian arrangement.

2. Size of the guarantee fund

Section 2-7 of the Guarantee Schemes Act states that the annual guarantee fund contribution shall be "the sum of 0.1 percent of total guaranteed deposits plus 0.05 percent of risk-weighted assets". For an average bank, this adds up to approximately 0.25 percent of guaranteed deposits. Banks with a Tier 1 capital ratio of over 8 percent receive a discount of up to 35 percent, while banks with Tier 1 capital at the statutory minimum level pay a 16 percent surcharge. The discount is calculated for both contribution components.

A deposit insurance system covering 100 percent of deposits up to a certain limit poses a considerable moral hazard. By paying marginally more than other banks, a bank can attract more deposits regardless of how risky its activities are. There is therefore international agreement that contributions to deposit guarantee schemes should be scaled according to banks' risk taking. Nevertheless, the most common arrangement is for contributions to be a fixed percentage of guaranteed amounts. In the Nordic countries, only Finland and Norway scale contributions according to risk.

The Federal Deposit Insurance Corporation in the US has charged a risk-based premium since 1993. Premium rates are set each year, and in 2008 range from 0.05 percent to 0.43 percent of guaranteed deposits.

Differentiation in the Norwegian scheme is very modest, and applies only when contributions are collected. The maximum risk surcharge is 16 percent, making the maximum contribution about 0.29 percent for the average bank.

The high Norwegian guaranteed amount calls for greater differentiation of guarantee fund contributions than in other counties in order for contributions to have any impact on banks' ability to attract large deposits by offering high interest rates. Differences in various banks' borrowing costs in money and bond markets are indications of how lenders rate various banks' risk exposures. These differences vary over time and reflect numerous factors other than the risk of insolvency, but they also suggest that contributions should be more strongly differentiated according to risk than they currently are.

In its letter to Kredittilsynet, the Ministry of Finance underscores that payments made to the guarantee fund must be considered insurance premiums and that member banks thus have no ownership rights to fund assets. Norges Bank agrees.

Contribution rates should, in accordance with ordinary actuarial principles, depend on the risk that pay-outs from the fund will be necessary. Measurements of this risk will of necessity have to be estimates.

The Tier 1 capital ratio is included in current contribution calculations and is an obvious risk measure. It does not capture all types of risk, particularly not the risk resulting from rapid growth in the bank's activities. International research literature has shown that strong growth in bank lending increases the risk that an individual bank and the banking sector will experience substantial losses a few years later. We saw examples of this relationship during the Norwegian banking crisis of 1988-93. Strong lending growth often takes place during expansions, when asset prices rise, banks' profits are solid and it is easy to raise fresh capital. Having the contribution depend on a bank's lending growth will increase the contribution's countercyclicality. This means abolishing the right to declare a "contribution holiday" when the fund exceeds the minimum requirement.

Norges Bank believes that the guarantee fund contribution should be based on the Tier 1 capital ratio and annual real growth in bank lending. The growth rate for lending should be measured as an average over three years wherever possible, to mitigate random fluctuations in contribution receipts over time. The lower the Tier 1 capital ratio and the higher the lending growth are, the higher the membership fee will be. When Pillar 2 of the new capital adequacy rules are implemented, Kredittilsynet will set individual capital adequacy requirements. It will then make sense to have deviations from these requirements included in the calculation. Table 1 shows a proposal for such contribution rates, but without individual capital adequacy requirements.

The rates in the table have been chosen so that in the period 1993-2005, i.e. the period before contribution holidays were declared, they result in broadly the same pay-ins to the guarantee fund as current rules, but with considerable differentiation between banks with different risk exposures. Here rates vary between 0 and 0.5 percent of guaranteed deposits. This is substantially greater risk differentiation than in the current system. Norges Bank's view is that such strong risk differentiation is necessary. Minor modifications to the definition of low, medium and high lending growth and Tier 1 capital ratio make relatively little difference for the total amount of contributions. The contribution rates in Table 1 must be assessed in the light of the requirements set for the size of the guarantee fund.

The chart below shows simplified estimates of what banks' total contribution payments would have been since 1993 at these rates. The chart also shows actual contributions to the commercial banks' and savings banks' guarantee funds up until 2002 and for the merged Banks' Guarantee Fund as from 2003. The estimates assume ordinary contributions calculated on the basis of the previous year's balance sheet and that full contributions are paid until the sum total of estimated pay-ins since 1993 is at least as high as actual pay-ins have been. Since then, i.e. as from 2006, half of the contribution amount is assumed. 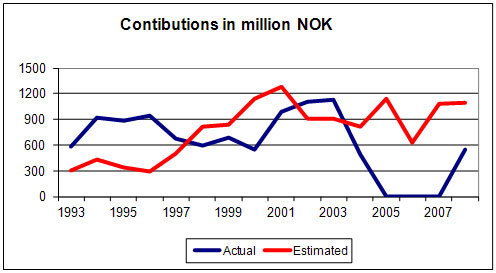 Newly established banks have by their nature strong lending growth in percent and may thus be affected by this proposal. With a Tier 1 capital ratio of over 12 percent, a fast growing new bank would have to pay a contribution of 0.2 percent. This is lower than the average in the current system. The proposal will therefore not act as an entry barrier for new banks to an appreciable extent, nor will it weaken competition in the banking market.

Membership of the guarantee fund is mandatory for Norwegian banks, while branches of banks from other EEA member states may join if they so choose. Branches are a peculiar type of member, because they do not have a separate balance sheet. Branches may also withdraw from the guarantee fund if it appears likely that extraordinary pay-ins may be imposed on member banks. Unless the Norwegian guarantee scheme is harmonised to a greater extent with comparable arrangements in other European countries, Norges Bank believes that the waiting period from the time the Banks' Guarantee Fund receives a membership termination notice from a branch member until membership is actually terminated should be increased from one to two years.

Branches of foreign banks pay only the component of the contribution that is based on guaranteed deposits and calculated only on the portion of deposits not covered by the home state deposit guarantee scheme. The parent bank's Tier 1 capital ratio is used to calculate a discount or surcharge on the ordinary contribution rate. Since branches of foreign banks pay reduced contributions, risk differentiation is even less for them than for Norwegian banks.

Norges Bank believes that in an insurance-based contribution structure as proposed above, branches must be treated in as identical a manner as possible with other banks. Deposits covered by the Norwegian guarantee must be the basis for calculating contributions. As risk measures, the Tier 1 capital ratio and lending growth at the entire bank must be used. These are variables that affect the probability of pay-outs by the guarantee fund. The fact that branches of foreign banks are ineligible for support measures under Section 2-12 of the Act, cannot be invoked to justify a lower fee for such banks. These support measures will primarily be used if the costs to the guarantee fund connected with such measures are less than the costs connected with receivership and paying out deposit guarantees.

Membership of the Banks' Guarantee Fund is particularly attractive to banks that are experiencing deterioration in their financial situation, as many banks are doing now. It is important to counteract this. A cut in the guarantee amount, that is higher in Norway that elsewhere, will reduce the problem. In any case, the fund should be allowed to become larger than current minimum requirements. It is especially important to abolish the right to declare a contribution holiday when the fund exceeds the statutory minimum. Guarantee fund contributions should better than is currently the case reflect the risk that a member will draw on the fund. Norges Bank believes that this can be achieved by having contributions depend on lending growth and the Tier 1 capital ratio. Contributions must be calculated on what is insured, i.e. guaranteed deposits. Branch members must to the extent possible be treated the same way as Norwegian banks.

By introducing a single basis for calculating contributions, a single risk-based guarantee fund contribution rate and more equal treatment of branches and Norwegian banks, the proposals above represent a simplification with regard to current rules.