The motif for the Supreme Court commemorative coin has been chosen

The year 2015 will mark the bicentenary of the inception of the Supreme Court of Norway. Norges Bank will commemorate this event by issuing an NOK 20 special edition circulation coin.

As is the case with previous issues, the motif on the coin's obverse will be a portrait of the King.

Norges Bank invited five participants to a competition to design the coin's reverse. The winning motif was designed by the painter and graphic artist Christopher Rådlund, and is a reproduction of one of the two lion sculptures flanking the main stairway in the Supreme Court's entrance hall. The sculptures were modelled by Lars Utne (1862-1922) and cast in brass. The lion motif is also a recurring theme in the Supreme Court building.

The NOK 20 coin will be issued in the first half of 2015. Images of the finished coin will be published in connection with the issue. 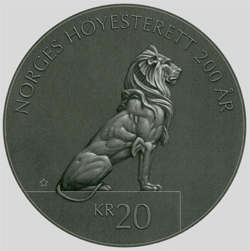