In 1913, a decision was taken by the Storting, the Norwegian parliament, to extend universal suffrage to include women on an equal footing with men. To mark the 100th anniversary of this event, Norges Bank will issue a 10-krone special edition circulation coin.

Norges Bank invited seven candidates to compete for the design of the coin's reverse. The winning design with the motto "Joining forces" is by illustrator and graphic designer Siri Dokken. The left side of the coin features four female figures with their arms outstretched as its central motif. Commenting on her motif, Dokken says that democracy is a bottom-up movement and that to vote is to join forces to move something together, to create change, move axes and centres of gravity. Minor adjustments may be made to the motif before the coin is put into production.

The coin's obverse features the portrait of H.M. Kong Harald V designed by Ingrid Austlid Rise, designer at Det Norske Myntverket AS (Mint of Norway). This motif has been featured on all special edition circulation coins in recent years.

The Norwegian Women's Suffrage Jubilee in 2013 will be celebrated locally, nationally and internationally. Norges Bank is cooperating with the committee appointed by the government to organise the jubilee celebrations.

The 10-krone coin will be put into circulation on International Women's Day 2013, i.e. 8 March. Photos of the final minted version will be published in connection with the coin's launch. 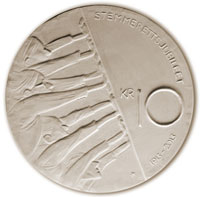