In 2011 Norges Bank will issue two commemorative silver coins to mark the central role and importance of sports in Norway. One coin will be issued to commemorate the 150th anniversary of the Norwegian Olympic and Paralympic Committee and Confederation of Sports (NIF). The other will be issued in connection with the FIS Nordic World Ski Championships 2011 in Oslo to commemorate the special importance of the sport of skiing in Norway.

Norges Bank invited six artists to participate in a competition to design the coin’s reverse. The winning designs are from Uniform Strategisk Design, created by Ina Viktoria Kristiansen. The designs are similarly composed, and both feature a horizontal division of the face of the coin. The lower portions are relatively recessed, with diagonal lines suggesting ski tracks. The upper portions feature athletes arranged in a frieze. Minor alterations may be made to the designs before production.

The obverse of both coins features the portrait of H.M. King Harald V created by Ingrid Austlid Rise, designer at Det Norske Myntverket (Mint of Norway).

Norges Bank will issue the coins in conjunction with NIF’s 150th anniversary and the FIS Nordic World Ski Championships 2011. The silver coins will be issued in early 2011, though a final date has not yet been set. Photographs of the minted coins will be released. 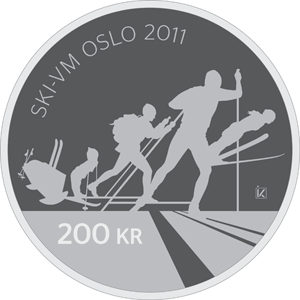