Design of university coin has been selected

The 200th anniversary of the founding of Norway’s first university will be celebrated in 2011. To mark the beginnings of higher education and science and scholarship in this country, Norges Bank will issue a special edition 10-krone circulation coin as part of the university bicentenary.

Norges Bank invited five artists to participate in a competition to design the coin’s reverse. The winning design is by Enzo Finger and features a Greek Ionic column, a classic – as well as classical – university symbol. Minor alterations may be made to the design before production.

The obverse of the 10-krone coin features the portrait of H.M. King Harald V created by Ingrid Austlid Rise, designer at Det Norske Myntverket (Mint of Norway). This portrait has been used on special edition circulation coins issued in recent years.

Norges Bank is issuing the coin as part of the anniversary celebrations coordinated by UiO 200, a project group established for this purpose by the University of Oslo. The university’s bicentenary will be commemorated by a number of events in 2011.

The issue date for the 10-krone coin is yet to be determined. Photographs of the minted coin will be released. 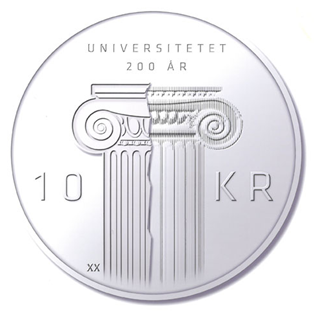