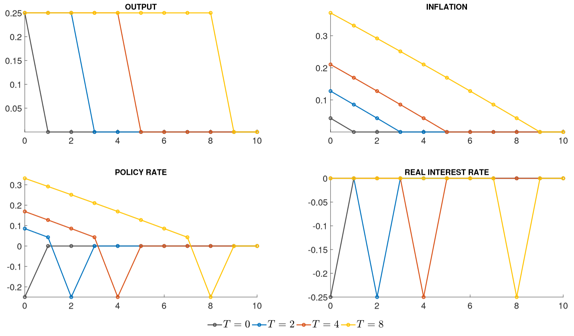 We see that the immediate effect on output is independent of when the real interest rate is expected to decrease. This is because in standard New Keynesian models, aggregate demand does not depend on the current real interest rate alone, but on the sum of expected real interest rates from today and to infinity. However, since the immediate effect is the same, the duration of the positive output gap is longer the further into the future the rate cut is expected to take place. Inflation depends on the entire expected future path of the output gap, and not just on current output, so that the immediate increase in inflation is larger the further into the future the real interest rate is expected to decrease. It is not really a “puzzle”given how these models are specified. The property is mainly an implication of the cocktail of sticky prices, complete markets and rational expectations, which are key assumptions in these models. But although not really a ‘puzzle’, it is arguably implausible. 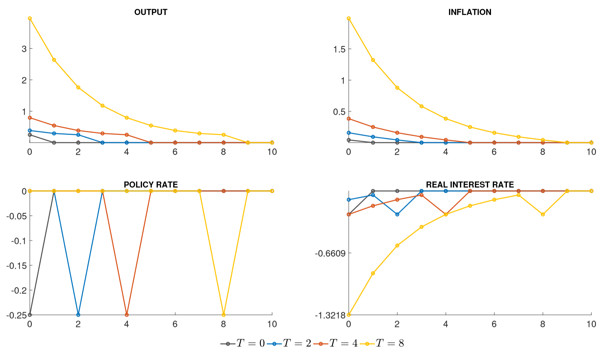 Due to the unrealistic effects of forward guidance in New Keynesian models, there have been attempts in the literature to change some of the assumptions in order to make the effects of forward guidance more reasonable. Deviations from rational expectations and incomplete markets are two ingredients that have been shown to fix, or at least attenuate, the puzzle (see Staff Memo for references).

DSGE (Dynamic, Stochastic, General Equilibrium) models used by central banks for policy analysis share many of the ingredients in the simple New Keynesian model, despite featuring a lot of extensions that are added to match data better. NEMO is a DSGE model used by Norges Bank as the core model for forecasting and policy analysis. (For a more detailed description of NEMO, see here). Norges Bank has, since 2005, been publishing forecasts of the policy rate for the three following years. This can be considered a quite explicit type of forward guidance. Since NEMO is used for producing these forecasts, one would like the power of forward guidance to be reasonable in this model. 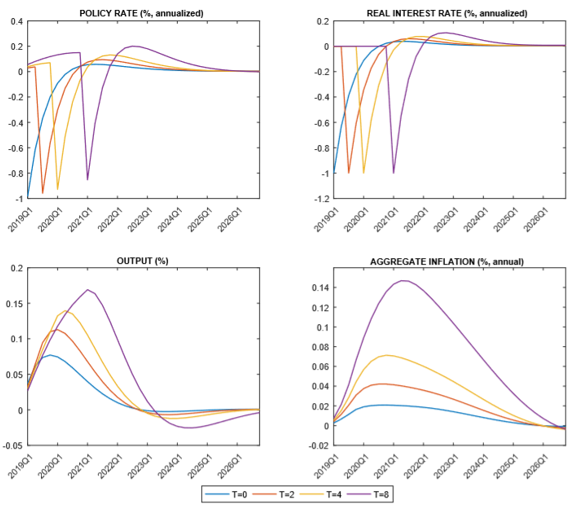 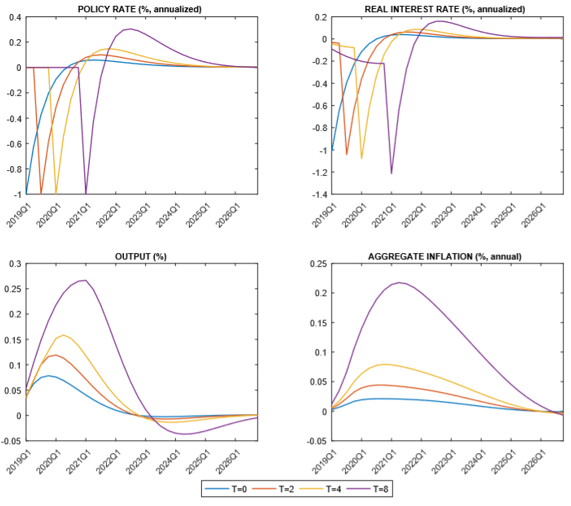 Let us now turn to forward guidance about the nominal rate in NEMO. Figure 4 confirms that the power of forward guidance is considerably higher for the nominal interest rate than for the real rate, especially when considering the peak effects on output and inflation. What the figure does not show, but which you can read in our Staff Memo, is that the effects become so large that the sign switches, so that an announced interest rate cut has a negative effect on output and inflation, if the cut happens 14 quarters ahead or more. This is due to the instability problem mentioned above, where the sign can change. This is well known in the literature (see for example Carlstrom, Fuerst og Paustian). This perverse effect of forward guidance is hardly relevant in practice and should be regarded as a sort of “bug” in standard DSGE models. When using such models for policy analysis, one thus has to be careful when modelling forward guidance.

All models have strengths and weaknesses, and we always add considerable judgment when using models for policy decisions. But even if we have ways to make the effects more realistic, we work continuously on improving NEMO. One feature that we consider adding to the model is “overdiscounting” of the future, as suggested by Gabaix. This makes agents in the model more myopic and reduces the power of forward guidance. We do believe that future guidance has some effect. But we also believe that what we do with the interest rate today is more important for current spending and pricing decisions than what we say we’re going to do far into the future. We would like models that we use for monetary policy analysis to have this property.