The macroeconomic effects of forward guidance

Modern monetary policy is all about communication – and mostly about the future. Many central banks now engage in guiding the public on the future policy stance, so called forward guidance. A finding in both theoretical and empirical models is that a surprise increase in the current policy rate will lead to an economic contraction and a drop in inflation, at least after some time. But what about forward guidance? In simple textbook models, forward guidance is very powerful, even in the short run. These models also carry the puzzling prediction, coined the “the forward guidance puzzle”, that the macroeconomic effects today are larger the more forward the guidance.¹ For example, announcing a temporary increase in the policy rate in five years would have a stronger impact on inflation today than a similar change in the current policy rate.

As economists, we rarely get to design our own experiments. If we could, we might have proceeded as follows: firstly, announce – for no good reason – a promise to increase the policy rate temporarily at some future date. Secondly, magically filter out any part of current macro developments driven by historical disturbances. Thirdly, ban all new economic disturbances. Then we could simply sit back and watch the isolated effects of our announcement unfold.

Meanwhile in the real world, we must rely on natural experiments, of which a monetary policy announcement would be an example. Hence, we use changes in future money market interest rates (FRAs) and stock prices on announcement dates to tease out the surprise components of central bank communication. In both Norway and Sweden, projections of the economic outlook and future policy rates are made public on a regular basis, but using the actual published interest rate projections instead of market expectations would preclude inference. Why? Imagine for a moment that the published interest rate path was fully expected by all agents in the economy, and, furthermore, that these anticipations were already reflected in macro data at the time of the announcement. In the absence of any new disturbances to the economy, nothing much would happen post announcement. This could lead us to the flawed conclusion that forward guidance has no effect on the economy. Changes in stock prices and future market rates on announcement days, on the other hand, reflect genuine surprises in the market that will only affect macro variables after the announcement.

However, changes in financial instruments on announcement dates do not come with a table of contents attached. For example, were market participants surprised by the actual policy decision? Or forward guidance? Or new information and reassessments regarding the economic outlook? Or a combination of all of the above?

In our analysis, we extend the approach suggested by Jarocinski and Karadi,  which  allows us to link market revisions to three underlying (and not directly observable) factors or “shocks”: a conventional monetary policy shock (the surprise element of the actual rate decision), a forward guidance shock and an information shock. We conjecture that an information shock is present whenever market rates and stock prices move in the same direction. In order to disentangle a conventional monetary policy shock from a forward guidance shock, we rely on the assumption that a genuine forward guidance shock cannot affect short-term interest rates that mature before the next interest rate meeting. We refer to the paper for more details on the identification approach.

In a final step, we feed the identified shocks into an empirical time series model (VAR model) and track their effect on the macro economy.

In Figure 1, we show the average macroeconomic responses to our three identified shocks, based on Swedish data. In the paper, we also show the results for Norway, which are similar. Both a positive monetary policy shock (target, first column) and a positive forward guidance shock (second column) lead to a textbook macroeconomic response: a slowdown in activity, an appreciation of the currency and a drop in the inflation rate. The quantitative effects from the two shocks are similar, although the effect on activity following a forward guidance shock is less pronounced. Hence, a tentative conclusion would be that an unanticipated promise to increase the policy rate roughly one year from now, would yield  similar macroeconomic responses(starting today) as a surprise change in the current policy rate. In other words, no clear sign of a forward guidance puzzle. 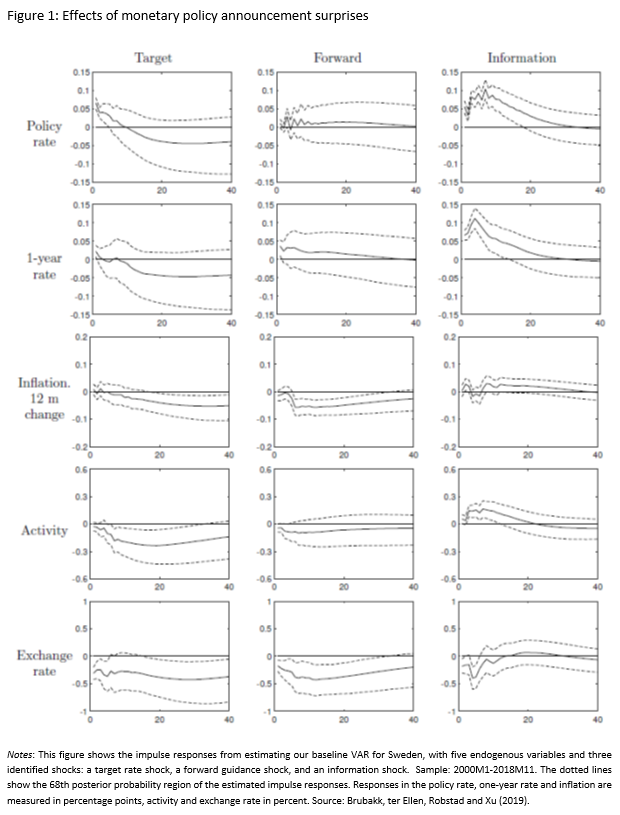 In order to address the empirical relevance of the forward guidance puzzle more specifically, we evaluate forward guidance targeted at different horizons. We repeat the exercise described above successively for all available FRAs, one at a time. These forward rate agreements reflect market participants’ expectations of the three-month money market rate on specific dates in the future (the International Money Market, or IMM, date).  More precisely, the first FRA (hereafter FRA1) reflects the expected three-month money market rate at the first upcoming IMM-date, FRA2 for the second upcoming IMM-date, etc. In practice, this means that we can use these FRAs as proxies for interest rate expectations next quarter (FRA 1) and up until 12 quarters from now (FRA 12). 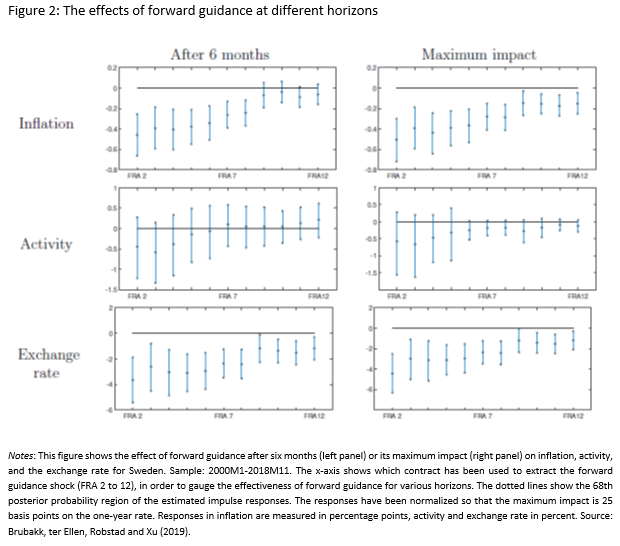 In Figure 2, we show the short run effect (6 months ahead) and maximum effect of forward guidance aimed at two (FRA2)² to 12 (FRA12) quarters ahead. The message is quite clear: the effects are smaller the more forward the shock is. In other words, the results indicate that forward guidance aimed at moving expectations about policy rates in the near term is more effective than forward guidance pertaining to policy rates further out on the horizon. This is the opposite of what the standard New Keynesian model predicts.

Our findings imply that using both the current policy rate and guiding the public about the near-term future policy stance can be effective in achieving the objectives of monetary policy. Statements about interest rate settings beyond two years into the future, however, are less effective in moving macroeconomic variables. This can have important policy implications, for instance in a situation where the short run policy rate hits the effective lower bound. In such a scenario, simple theoretical models would predict that forward guidance far into the future would easily offset the negative consequences of not being able to lower the current policy rate.  Our results cast doubt over the effectiveness of such a strategy.

[1] See an earlier post on this blog for a more thorough discussion on the subject.

[2] We cannot use FRA1 to identify forward guidance, as sometimes this date will be before the next policy meeting and thus only reflect surprises in the current policy rate.