Navigating the Norwegian Economy with NEMO

The quotation above refers to Norges Bank’s use of models. When used wisely, models can be of great assistance to policymakers in understanding the economy and in the conduct of monetary policy. The Bank’s workhorse model, NEMO (Norwegian Economic MOdel), has been polished, and is now as shiny as ever. What’s new?

Dynamic stochastic general equilibrium (DSGE) models play an important role in the policymaking process in several countries around the world. Many central banks such as the European Central Bank, Sveriges Riksbank, the Bank of Canada, the Reserve Bank of New Zealand, and the Swiss National Bank use these models in their policy processes. Since 2006, Norges Bank has used a DSGE model called NEMO to identify the sources of business cycle fluctuations in Norway, to conduct scenario analysis, to produce macroeconomic forecasts, and to conduct monetary policy analysis. The model has recently been re-estimated to reflect economic conditions since the introduction of inflation targeting in 2001 and other structural changes. In this blog post, we summarize the main changes in the model after the recent estimation and show with a few examples how the model can be used for policy analysis. For more results and details of the model estimation, see Staff Memo 5/19, “Navigating with NEMO.”

Changes in NEMO after estimation

The economy is a highly convoluted dynamic system, and DSGE models like NEMO are substantially simplified versions of that system. For NEMO to be of use to guide monetary policy and help us hone our intuitions, the relationships in the model must be quantified in such a way that they do the best possible job of replicating the dynamics of the Norwegian economy. The process of fitting the model to data is called estimation.

NEMO has recently been re-estimated for a number of reasons. First, sufficient data are now available from the period of inflation targeting (i.e. since 2001). Second, as long-run ratios of main macroeconomic and financial aggregates have changed over time in Norway, they have been updated in the model. For instance, the level of household debt and housing wealth relative to mainland GDP has risen sharply over this period. Exports and imports of traditional goods and services are also higher now relative to mainland GDP than was the case before. Third, we aim at bringing the variances of the model’s variables (i.e. how much the variables fluctuate) closer to those in data. Finally, we wanted to improve NEMO’s ability to match the macroeconomic effects of monetary policy and oil price changes to what is found in empirical models.

We can draw several interesting conclusions from the re-estimation. First, a key result is that the “Phillips curves” in the model have become flatter, i.e. a given increase in capacity utilization has a somewhat smaller effect on wages and prices. A relatively flat Phillips curve is in line with other models that Norges Bank uses, and is also found in the estimation of DSGE models in other countries.

Second, the overall effects of a change to the policy rate are somewhat smaller, compared to the previous version. In isolation, the higher levels of household debt and housing wealth suggest that an interest rate change in the model would have a somewhat stronger impact on the economy. However, the estimation revealed that the degree of real rigidities in the Norwegian economy is found to be higher relative to the previous version of the model. By real rigidities we mean the economic mechanisms that reduce the responsiveness of real prices and quantities to macroeconomic developments, such as consumers’ willingness to smooth consumption over time and firms’ ability to rapidly change investment expenditures. This latter finding makes prices and demand components react less to changes in the policy rate.

Finally, we find that economic developments abroad, as well as the fluctuations in the exchange rate, have a greater impact on the Norwegian economy. This is likely due to the higher export and import shares, compared to the previous version. This finding points towards a more open economy.

Just like the Norwegian economy, it can be challenging to fully comprehend how a model of NEMO’s size works. Even if one understands the more than 100 equations in the model equation by equation, a key challenge is how to assess the relative strength of the various economic forces and how they interact. Luckily, there are various ways to highlight the mechanisms at work.

Business cycles in DSGE models like NEMO are driven by exogenous impulses, so-called “shocks”. Without shocks, the model would always be in its long-term equilibrium, called the steady state of the model. However, owing to the endogenous propagation and feedback mechanisms in the model, the impulses from shocks to the model variables persist for a long time. In NEMO, there are 26 different shocks, such as domestic demand, financial, and external shocks.

Figure 1 shows a so-called impulse response analysis from one of these shocks, namely a monetary policy shock (an exogenous change in the policy rate of one percentage point on an annualized basis). Like a solar flare, the shock suddenly appears and then gradually dies out.

A rise in the policy rate affects the macroeconomy through two main channels: A reduction in domestic aggregate demand and a stronger real exchange rate. Initially, the higher interest rate is passed on through the banking sector to households, who suppress their consumption, and to firms, which reduce their investment, resulting in a fall in mainland output. Firms also reduce their demand for labor, leading to a reduction in wage growth. Additionally, a fall in house prices makes banks less willing to offer new loans to households, reinforcing the decline in consumption.

The Norwegian krone appreciates on impact, leading to a reduction in exports and an increase in imports. Lower wages and the stronger currency (which reduces import prices) bring about lower aggregate inflation. The central bank tries to stabilize the economy by lowering the policy rate, reversing the effects mentioned above. 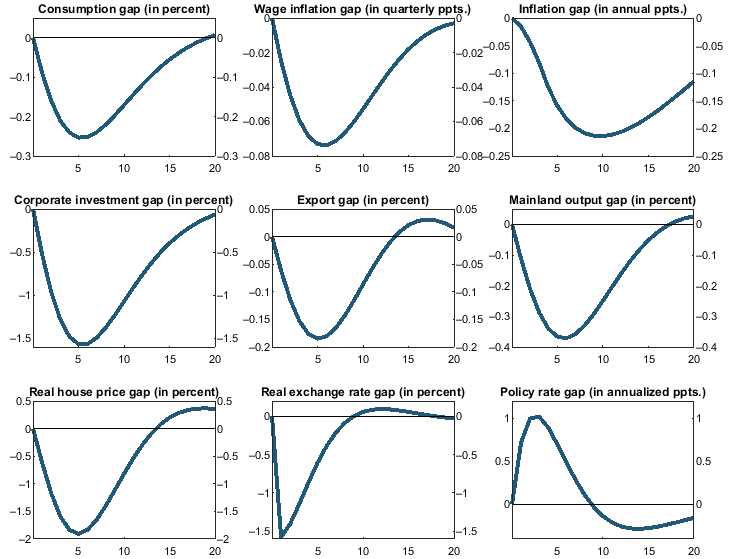 An alternative way of investigating the model’s properties is through a historical shock decomposition exercise. In this exercise, the model finds what combination of shocks best explains the dynamics of model variables over the business cycle. Figure 2 shows a shock decomposition exercise for the mainland output gap for the period 2006-2017. The 26 shocks are categorized into seven groups for easier exposition.

Starting with the period following 2007, NEMO appears to be able to capture the global recession quite well.  We see large negative shocks coming from abroad in this period (red bars). Additionally, supply shocks (in purple) contributed to the slowdown, whereas domestic demand shocks (in orange) pulled the economy up, preventing an even larger recession.

In the more recent years, negative impulses from abroad (particularly low exports) have again contributed to a downturn, according to NEMO’s interpretation of the economic developments. Lower oil prices and oil investment (in blue) have had similar but less pronounced effects on the output gap. The limited negative contribution to mainland output from lower oil prices can be partly attributed to accommodative monetary policy. A weak exchange rate (in green) has also had a positive effect on output. 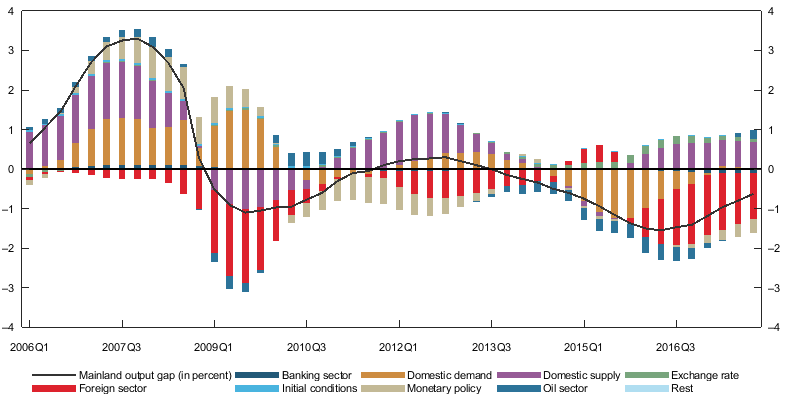 In the end, policy decisions are taken by people who use their best judgement. Used properly, DSGE models like NEMO can strengthen that judgement.  When employed to analyze the Norwegian economy and make forecasts, NEMO is used in combination with a broad set of data, empirical models and judgement. Re-estimation and further development of NEMO are important for the model to continue to be a useful tool for monetary policy analysis.