The economic effects of lower capital requirements during economic downturns

Banks in many countries are subject to countercyclical capital buffer requirements (CCyB). These requirements are meant to be increased during upturns and may be reduced in economic downturns. The key objective of the CCyB is to reduce the risk that the supply of credit is constrained during an economic downturn, ultimately undermining the performance of the real economy. During the initial downturn caused by the Covid-19 pandemic, almost all countries with an active CCyB requirement reduced it in an effort to stabilize the macroeconomy. For instance, Norway reduced the CCyB from 2.5% to 1% on the 13th of March. In a recent working paper, we shed light on how such a reduction in capital requirements can affect bank lending and real economic outcomes.

A key challenge with understanding the impact of lower CCyBs on bank lending and real economic outcomes is that the CCyB is a relatively new policy tool and – prior to the Covid-19 pandemic – has rarely been lowered. Because of this, we have not yet been able to conduct thorough empirical analysis of the effects of lower CCyBs on bank lending and macroeconomic outcomes. Moreover, since much macro-financial data is released with a lag, it is too early to evaluate the impact of the recent reduction of the CCyB. To get a sense of how effective the CCyB can be during a downturn like the one we have recently seen, it is therefore useful to look at experiences with similar policy changes.

In a new working paper we use data from several sources to investigate how capital requirement reductions affect bank lending and ultimately real economic outcomes. There are primarily two empirical challenges when analyzing the effects of capital requirement changes. First, capital requirement changes are often imposed on all banks, and it is therefore hard to identify how banks would behave in absence of the capital requirement change – as there is no valid control group. This is especially relevant for the CCyB, which is meant to address systemic risk and as a result is common across all banks. Second, if capital requirement changes are imposed on individual banks, it is typically done so due to specific bank outcomes such as credit growth, which makes it impossible to disentangle the effect from the regulation change and any change in credit growth.  Our empirical analysis attempts to address these two issues, by focusing on the lending response of a subset of Norwegian banks during their transition from one regulatory regime – referred to as Basel I – to another regulatory regime – referred to as Basel II – in 2007 and 2008.  The Basel II transition lead to a reduction in the capital requirement for some banks and not for others just prior to an economic downturn. Moreover, the change in capital requirements were more plausibly unrelated to bank behavior. By analyzing how banks responded to the Basel II transition, we can therefore learn something about how banks would respond to for instance a reduction in the CCyB in a downturn 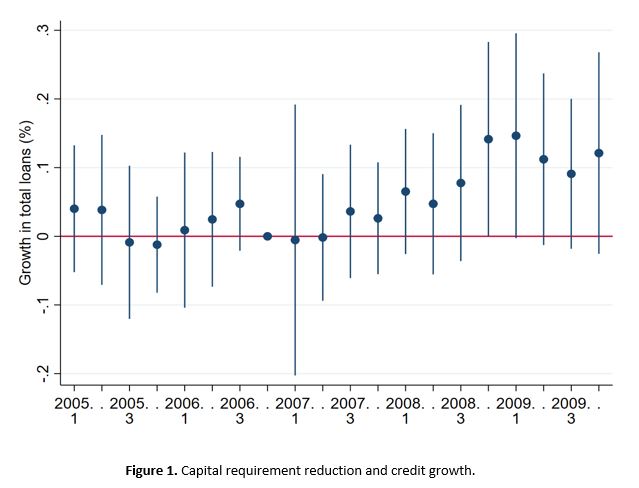 The capital requirement reduction led to a broad-based increase in lending. In the paper, we document how both household and corporate lending increases. One potential worry is that increased lending to firms is driven by firms demanding more credit due to the ongoing financial crisis. In order to check this, we use loan-level data to investigate both how prices and quantities change. According to basic economic theory, demand and supply shocks have similar impact on quantities but move prices in opposite directions. We therefore check whether the reduction in capital requirement was associated with higher loan volumes and lower interest rates. Banks with a larger reduction in capital requirements decreased interest rates significantly while increasing quantities, suggesting that the observed growth in lending indeed is due to higher credit supply.

While the expansion in lending is broad-based, conditions in both the banking and the firm sector matters for how it transmits to the real economy. First, banks with initially lower capital ratios respond stronger to the capital requirement reductions. This is intuitive, as these banks are more likely to perceive the regulatory capital requirement as a binding requirement. This finding suggests that capital requirement reductions can be more effective when banks already are (close to being) constrained. Second, even though banks expand lending to both firms and households, they do not treat all borrowers similarly. Specifically, banks that expand lending to firms by more do so primarily by lending to firms who, according to several indicators, are financially healthy firms. An implication of this is that the effect of lower capital requirements on firm lending depends on firms’ financial health.

The increase in lending to firms matters for the real economy. In the final part of the paper, we document this by investigating how firms borrowing from banks with a larger capital requirement reduction respond. We find that they, among other things, increased their capital investments. Therefore, it is likely that lower capital requirements – via increased bank lending – increased capital investments at the macroeconomic level.