Is the global financial cycle a main force behind gross capital flows between countries? Rey (2015) is concerned that a global financial cycle may undermine the monetary policy autonomy of small economies.  In contrast, Aizenman, Chinn and Ito (2016) find monetary policy independence to be intact, and they find that flexible exchange rates help stabilization in small open economies.

The stance of the global financial cycle is often measured by the VIX index. A surprising drop in the VIX index is interpreted a positive foreign capital supply shock – possibly fueled by low interest rates in the US. But a low VIX index has also been found to lead to high real activity (see Bloom (2009)). The status of the VIX index as a main driver of capital flows is therefore open to interpretation – we do not know whether capital inflows and gross bank balance sheets increase because the VIX index falls and foreign interest rates are low (and international investors do risky “carry trade”), or mainly because global activity increases (so that funding needs and hedging needs in foreign currency increase).

In recent research, Christine Blandhol and I use monthly data from Norwegian banks’ balance sheets (1999 – 2016) to analyze determinants of gross capital inflows to Norway. Our results indicate that gross inflows to Norway are mainly determined by global real activity, while the global financial cycle is less important. Figure 1 informally indicates that there may be a relationship between the foreign funding of Norwegian banks and global activity measured by US industrial production.  We measure gross foreign funding as banks’ foreign currency market funding as a share of total market funding.

Figure 1. Foreign funding of Norwegian banks*) and US Industrial Production. 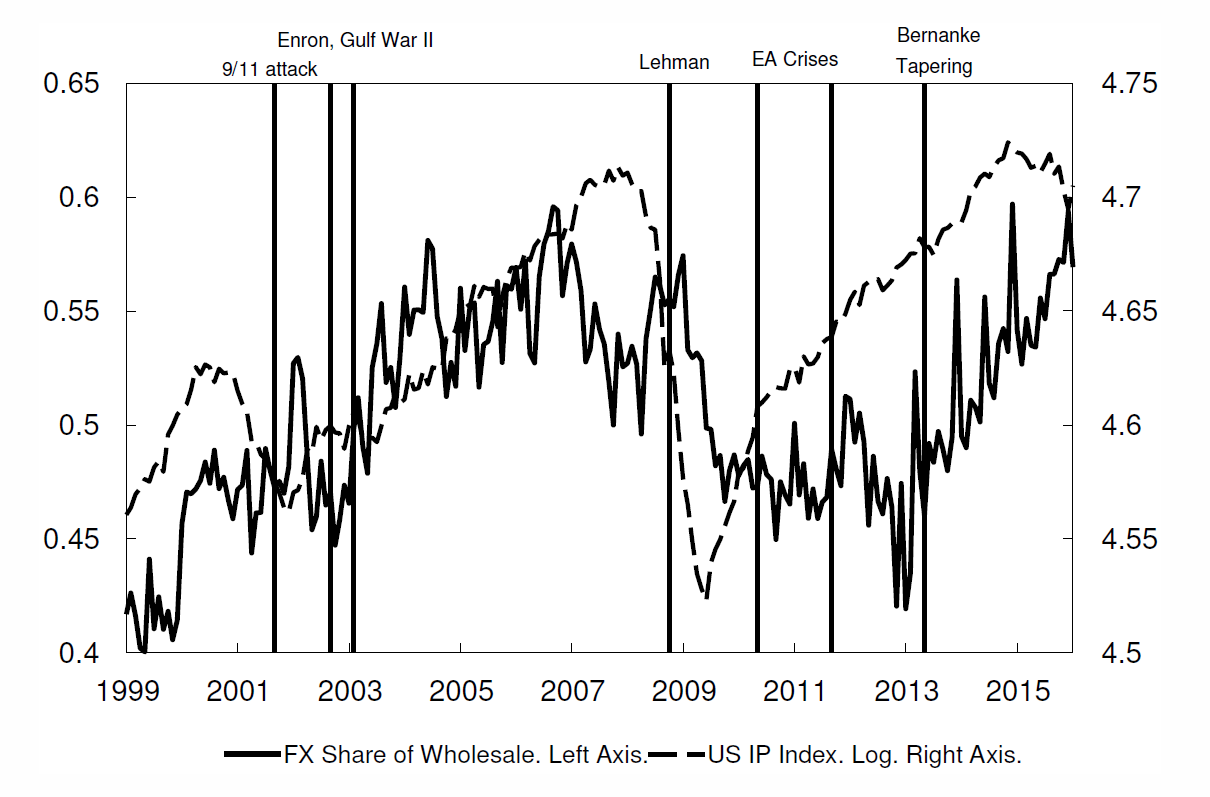 There are several reasons why the foreign funding share could  increase when global activity increases. Exporters may want to borrow in foreign currency in order to hedge their risk, and this may call for more foreign funding by banks (because they also hedge). Second, banks’ foreign portfolio activities increase – leading to larger bank foreign funding needs (due to hedging). The “dollarization” of banks’ gross balance sheets therefore may increase when global activity is high, and this means that gross capital inflows will increase.

We estimate a structural VAR model, and we find that when global activity  (proxied for example by US Industrial Production) falls, Norwegian banks’ foreign currency funding share falls after about one year, as illustrated in figure 2.

Figure 2: Response of the foreign funding share of banks to a 1 S. D shock to US Industrial Production. 84% credible bands. Months on x-axis. Percentage points on y-axis. 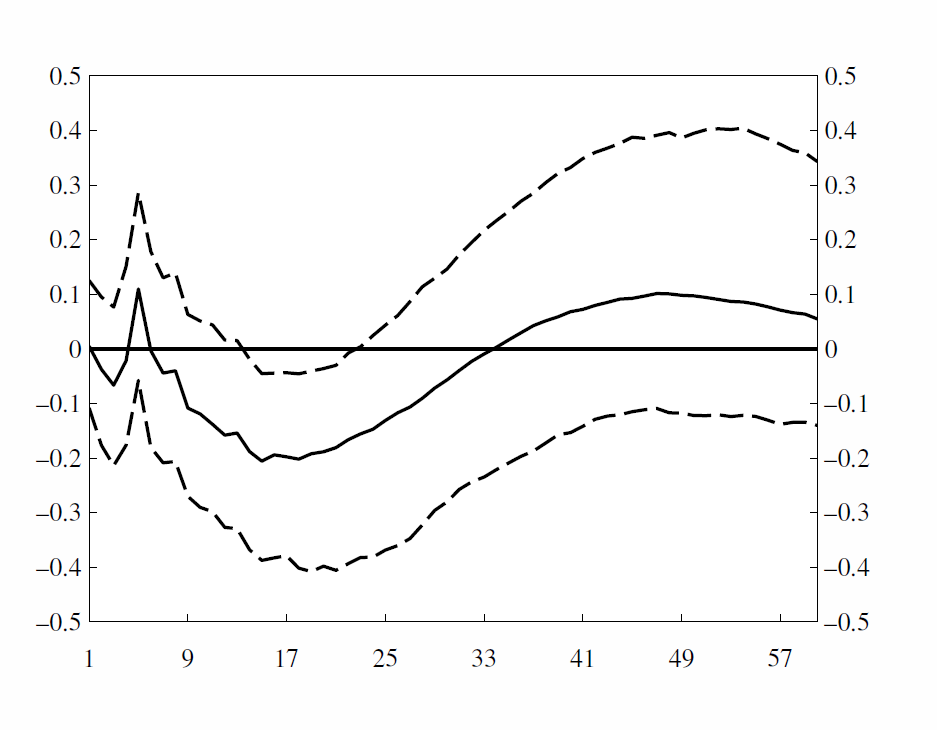 The impact of a VIX-shock on the foreign funding share of banks is also negative but shows up only after more than two years and is less credible (see figure 3). We find it likely that the lagged impact of the VIX-shock reflects an indirect effect via global activity only, rather than a direct risk-taking effect. If the effect is mainly indirect, we would indeed expect the VIX shock to affect capital flows with a delay (after activity has fallen), which is what we observe in the data. If the effect of the VIX-shock on capital flows was direct, we find it plausible that the effect would show up earlier, not later, than the effect of a change in real activity.

Figure 3: Response of the foreign funding share of banks to a 1% increase in the VIX index. 84% credible bands. Months on x-axis. Percentage points on y-axis. 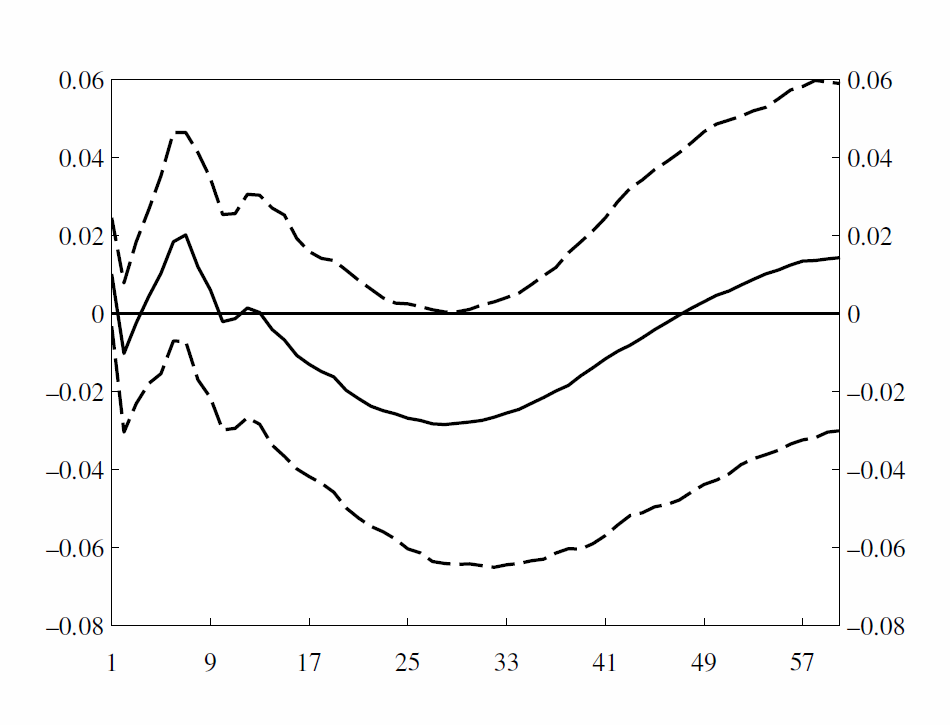 We also investigate monetary policy autonomy. We find that the central bank responds in a stabilizing fashion to a surprise increase in the unemployment rate, and reduces the interest rate (see figure 4).

Figure 4: The interest rate response to a 1 percentage point increase in the unemployment rate. 84% credible bands. Months on x-axis 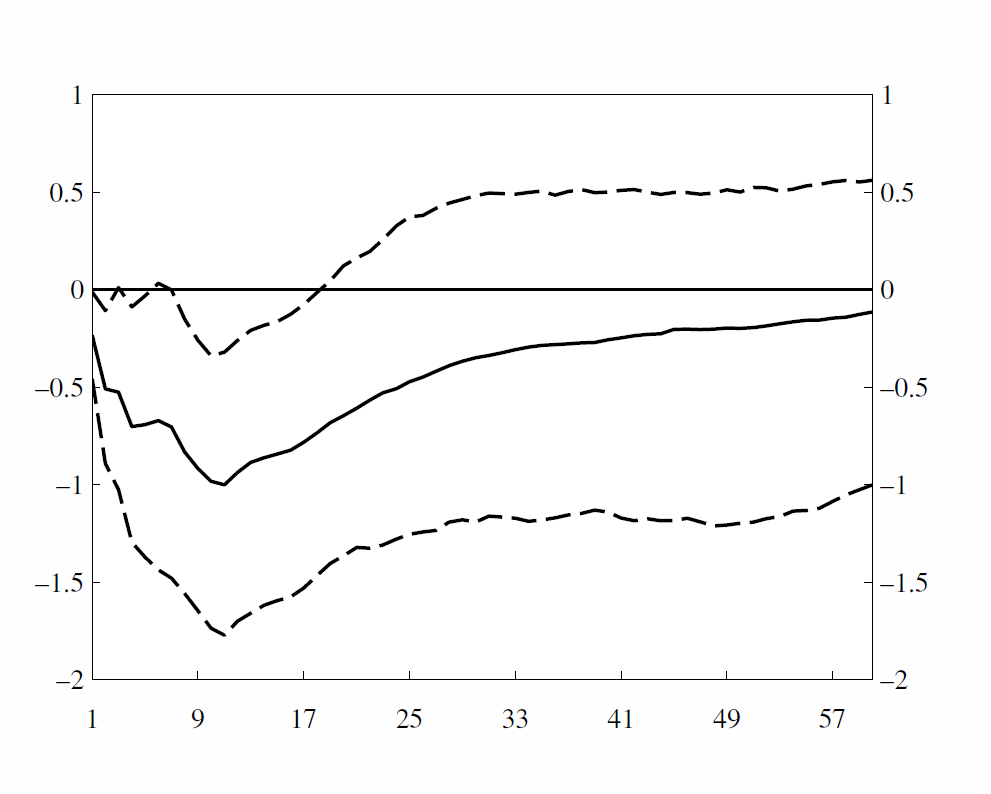 Furthermore, there is no indication of a counterproductive procyclical (“carry trade”) effect as a result of the lower interest rate (see figure 5) – the foreign funding share increases as the domestic interest rate is lowered.

Figure 5: The foreign funding share response to a 1 percentage point increase in the unemployment rate. Months on x-axis.

Our findings do not imply that the VIX index and global uncertainty are unimportant for banks’ funding conditions. Instead, global uncertainty is probably important for domestic as well as foreign funding conditions, and therefore the VIX index does not trigger a sizeable change in the foreign funding share. This conclusion is consistent with evidence that risk premia in Norwegian markets are tightly linked to global markets, see e.g. Lund, Tafjord and Øwre-Johnsen (2016).