The effects of financial fluctuations: New US evidence and policy implications

For the last 20 years, inflation targeting has been seen as a successful framework for monetary policy and, in fact, it has been adopted widely around the world. Promoting price stability was seen as fully compatible with stable growth in real economic activity. This view found support in theoretical models developed in academia and used by central banks but also in the historical experience of the last 20 years, characterized by remarkable stability in inflation and real economic activity. However, inflation targeting may be less successful in achieving stability in the real economy in presence of financial shocks.

Such shocks may have a large impact on financial variables, and to some extent also on economic activity, but limited effects on inflation. In presence of important financial shocks, a monetary policy based on strict inflation targeting may be insufficient to guarantee macroeconomic stability. Indeed, as experienced during the macroeconomics boom of the mid 2000s and the 2007-2009 crisis, financial shocks can create large boom-and-bust cycles in credit and housing in a context of stable inflation.

In a recent paper written with Francesco Ravazzolo (Free University of Bolzano/Bozen) and Samad Sarferaz (ETH Zürich), which is forthcoming in the Economic Journal, we investigate the importance and the macroeconomic effects of shocks originating in the financial sector over the period 1985-2011 in the United States.

We note that the financial sector has long been seen as a propagation mechanism for macroeconomic shocks originating in the real economy or by the monetary policy authority in its attempts to stabilise the economy. But such a role as a mere propagator of shocks does not square well with the narrative of the Great Recession (but also the previous boom phase), when the direction of causality seemed to be reversed, going from the financial sector to the real economy.

Important events originating in the housing sector and in credit markets had a large effect on the real economy, suggesting that the financial sector broadly defined may be more a source of shocks with important macroeconomic consequences rather than simply a propagator of shocks.

Our new study investigates the importance of shocks originating in the financial sector in the context of an empirical model estimated on US data and identified with a minimum set of assumptions on the sign of economic variables’ responses to shocks. More precisely, we estimate a Structural Vector Autoregressive (SVAR) model identified with sign restrictions derived from economic theory. The estimated financial shocks may be related to events like credit liberalisations, financial innovations, relaxations of credit standards, stock market and housing bubbles, housing demand fluctuations and variations in economic uncertainty.

In a first step, we study financial shocks jointly with several other macroeconomic shocks – for example, supply, demand, investment-specific and monetary policy shocks – and we quantify their importance for the US economy.

In a second step, we disentangle financial shocks into three different components: shocks originating in the housing sector; shocks originating in credit markets; and uncertainty shocks. In the data, housing booms, credit booms and decreases in uncertainty are often correlated: the methodology of our research makes it possible to provide some new results on the direction of causality between these macroeconomic events.

We find that financial shocks are major drivers of fluctuations in US economic activity, stock prices and investment; but they have had a limited effect on price inflation over the last three decades. Financial shocks explain a large part of the output contraction during the 2007-2009 crisis.

These results can be seen in detail in Figure 1 where we plot a decomposition of fluctuations for the macroeconomic variables included in our baseline model. In the vertical axis we quantify the share of fluctuations attributed to each shock. In the horizontal axis we plot the horizon at which the fluctuations are evaluated in quarters (from the short-run to the long-run). Financial shocks (represented in purple) explain on average around 30 percent of output fluctuations across different horizons. Those shocks are even more important for investment and stock prices. In contrast, they play a minor role for price inflation variability which is mainly driven by other demand shocks represented in green. Notably, negative financial shocks lower output and increase various measures of interest rate spreads (which are included as unrestricted variables into the system) in keeping with any meaningful definition of a financial shock. 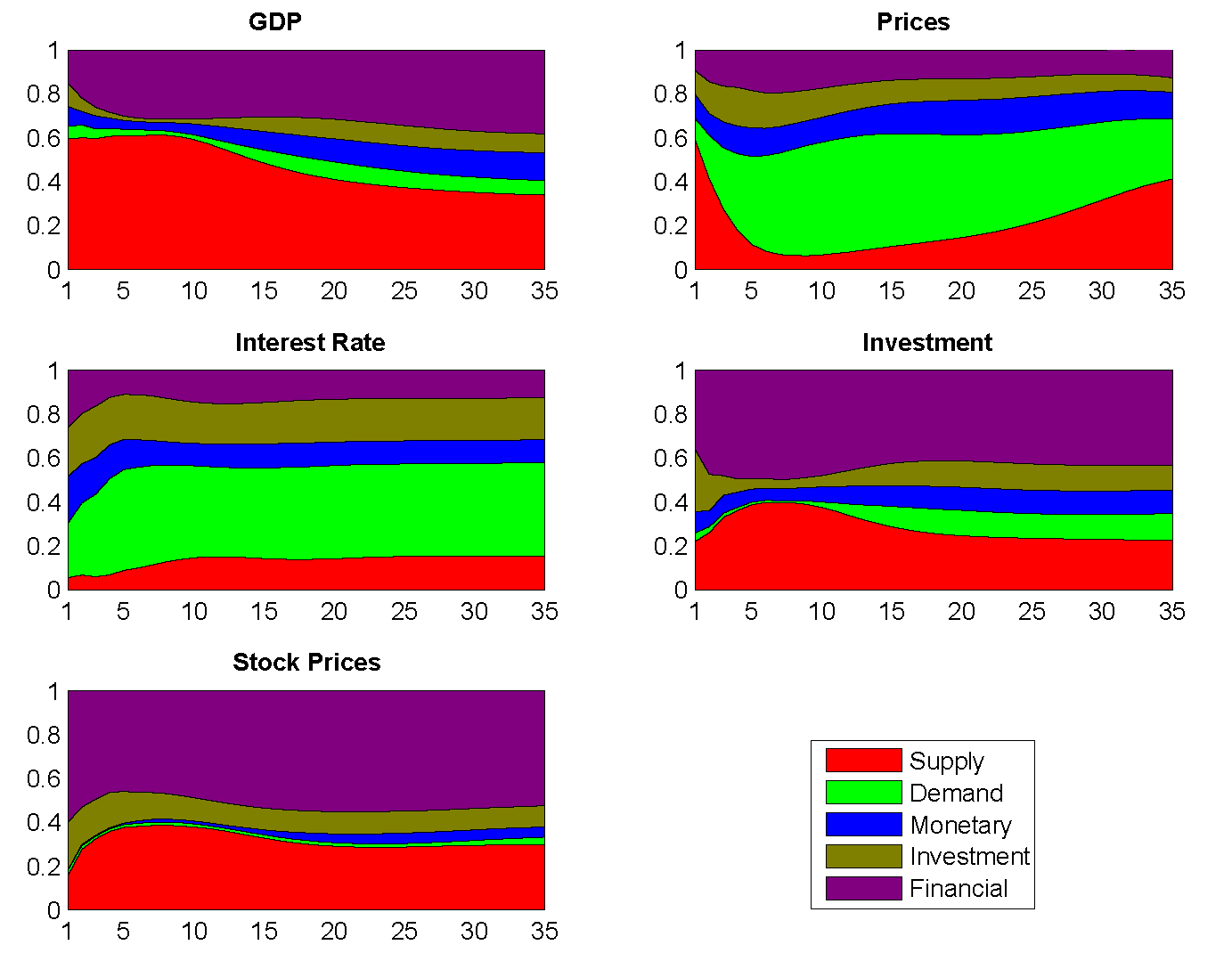 Figure 1: Median forecast error variance decompositions at each horizon for the baseline model.

The results indicate that a strict inflation targeting monetary policy may not be sufficient to preserve macroeconomic stability. Indeed, according to the model, financial shocks may create large boom-and-bust cycles in credit and housing in a context of stable inflation. In other words, financial shocks seem to generate a trade-off for the monetary policy authority as discussed in Christiano, Ilut, Motto and Rostagno (2010).

When disentangling general financial shocks into housing shocks, credit market shocks and uncertainty shocks, we show that shocks originating in the housing sector play a leading role in business cycle fluctuations relative to the other two shocks. Above all, they have large and persistent effects on economic activity.

The model therefore highlights the importance of developments in the housing sector to explain a substantial share of fluctuations in credit and in economic activity. These housing shocks may have a broad economic interpretation and capture housing preference shocks, bubbles in real estate markets or changes in households’ beliefs about house prices. Alternative interpretations involve productivity dynamics in the construction sector or international factors.