Central Bank Independence – What We Know and What We Don’t

Central banking came of age in the 20th century. At its start, the world had only 18 central banks (Chart 1).  Most did not have a well-defined statutory, much less independent, role in setting monetary and financial stability policies. They existed, by and large, as an operational agent of government. By the end of the 20th century, the world had around 200 central banks, pretty much one for each nation state.  The fraction of them with operational independence for the setting of policy had risen to 80-90% (Chart 2). Central banks and their independence had become an international norm in the space of a century.

The widespread adoption of central bank independence was born out of the economic situation of the 1970s. The Great Inflation had seen high and persistent inflation across the world and economists turned their attention to the role that monetary policy played in this phenomenon. The time-consistency theory of Kydland and Prescott (1977), Nordhaus (1975) and Barro and Gordon (1983) provided an elegant answer to what might be going on.  Governments had a natural tendency to over-inflate their economies, especially around election time, generating an “inflation bias”. To curb this inflation bias, some institutional means was needed to constrain government’s policy hand.  Rogoff (1985) developed a model which provided such an institutional fix.  Monetary policy decisions were to be delegated to a “conservative”, inflation-minded, central bank acting independently from government.  In this way, central bank independence could prevent, at source, a return to the Great Inflation of the 1970s.

The macro-economic benefits, in theory, did not end there.  Provided inflation expectations were well-anchored and central banks were not too inflation-averse – “inflation nutters” in the language of Mervyn King – monetary policy could be effective in stabilising output in the economy too.   In other words, central bank independence was a potential twin-win, reducing inflation biases at no cost in increased output variability – a free lunch.

Empirical evidence followed to test these hypotheses. During the 1980s and 1990s, a number of papers established a statistically significant link between the level and variability of inflation and the degree of central bank independence across a range of countries.   These cross-country correlations strongly suggested central independence was an important contributor to reduced inflation bias (Chart 3) and that it wasn’t associated with increased variability in output (Chart 4).  The free lunch in theory was there in practice too. And this evidence, in turn, helped spur moves towards central bank independence in the latter-part of the 20th century.

Interestingly, a look at more recent time periods suggests these observed associations have vanished since the start of the 21st century (Charts 5-7). What explains this disappearing correlation?  Some have used it to question whether the earlier link between independence and low inflation was no more than a statistical mirage. It could be argued that the fall in inflation over this earlier period was instead the result of the benign macro-economic environment of the Great Moderation.   In other words, better inflation outcomes in the late 20th century might have reflected good luck rather than good central bank management.

However, this line of argument misses the fact that reduced-form correlations such as these can hide the true drivers of macroeconomic outcomes and relationships. The 21st century has been a period in which low levels of inflation and high levels of independence have become an international norm, causing a breakdown of the observed correlation, but not the underlying relationship. This interpretation would imply that it would be a very dangerous moment to sacrifice independence.

The time-consistency problem familiar from monetary policy has a clear read-across to the world of financial stability. Governments have an incentive to run their financial systems, as well as their economies, hot in the interests of growth and electoral advantage.  This generates a tendency to loosen regulation too far during credit booms, increasing the risk of future bouts of financial instability.  In other words, there is a potential problem of “instability bias” in regulatory policies, to accompany the “inflation bias” in monetary policies.

In fact, I would argue this time-consistency problem is potentially greater in the financial stability sphere than for monetary policy, for two reasons. Credit cycles tend to be longer in duration, and larger in amplitude, than typical business cycles. This means wishful thinking and policy myopia (“this time is different”) are more likely to arise in credit booms than during typical business cycle upswings, exaggerating the time-consistency problem of financial stability policies.

The costs of financial instabilities and crises also tend to larger than the costs of inflationary surges.  This means the temptation to act in a time-inconsistent fashion – talking tough ex-ante, but acting weak ex-post – also tends to be greater. That can encourage risk-taking and amplify financial cycles and crises – a doom loop. The Global Financial Crisis, a long-duration credit boom that prompted massive government support ex-post, was a good example of these acute financial stability time-consistency problems in practice.

As with monetary policy, one institutional fix for this problem is to delegate prudential policy-making to an independent agency, better able to curb credit cycles and forestall financial crises.  This helps explain the shift towards independence in the setting of regulatory and supervisory policies over the past decade. Although the empirical evidence has lagged its monetary counterpart in this area, there is some tentative evidence that, as with monetary policy, independent financial policy can lead to better stability outcomes, without a loss of efficiency in the financial sector. Table 1 shows empirical work that increased regulatory and supervisory independence (RSI) is statistically related with a lower incidence of non-performing bank loans and less volatility on the return on banking sector assets, while Table 2 shows that the same increases in RSI do not lead to reduced efficiency in terms of margins or cost-to-income ratios. In other words RSI, like its monetary policy counterpart, appears empirically to be a twin-win, with reduced financial instability coming at no discernible macro-economic cost.

Given the practical success of independence, it is important to guard it for the future. And there are potential threats here. Central banks around the world have expanded their balance sheets massively over the past decade, and particularly over the past year. While this is not monetary financing, it has blurred the line between the monetary and fiscal realms and, among some people, raised questions of independence. The test will come if and when inflation begins to rise and central banks need to tighten policy to meet their mandate, independently of the prevailing fiscal stance. At that point, the strength and effectiveness of the legal and institutional frameworks surrounding independence will be crucial in ensuring we continue to benefit from the twin-wins that have been a feature of the last few decades.

Kydland and Prescott (1977), ‘Rules Rather than Discretion: The Inconsistency of Optimal Plans’ Journal of Political Economy, University of Chicago Press, vol. 85(3), pages 473-491, June. 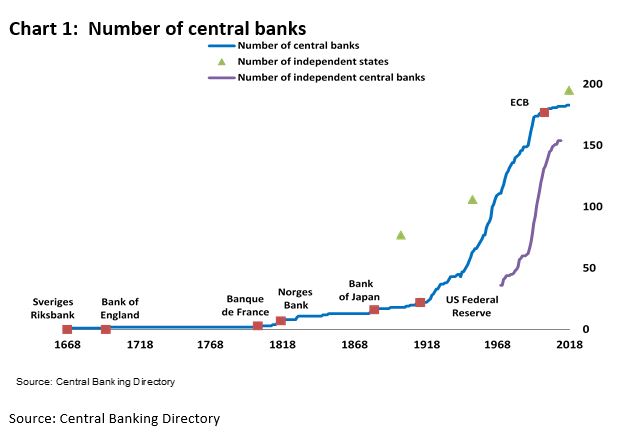 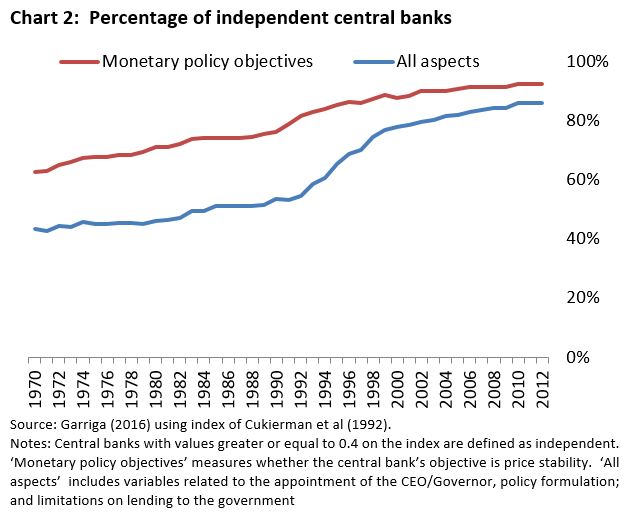 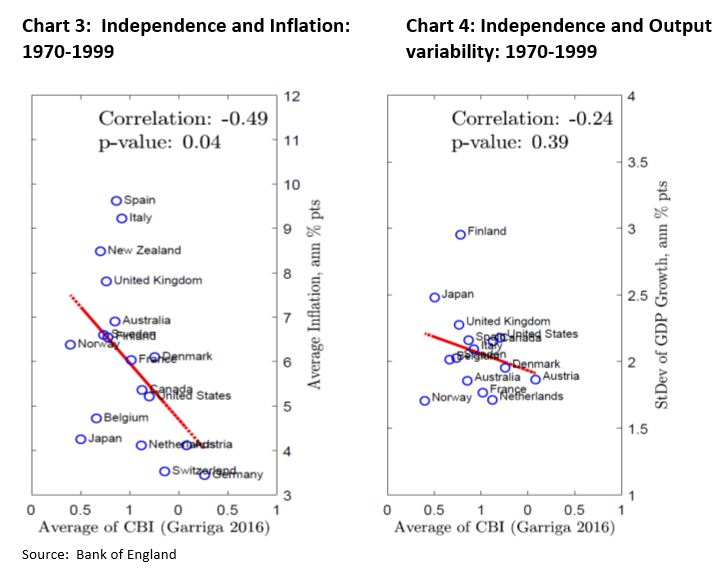 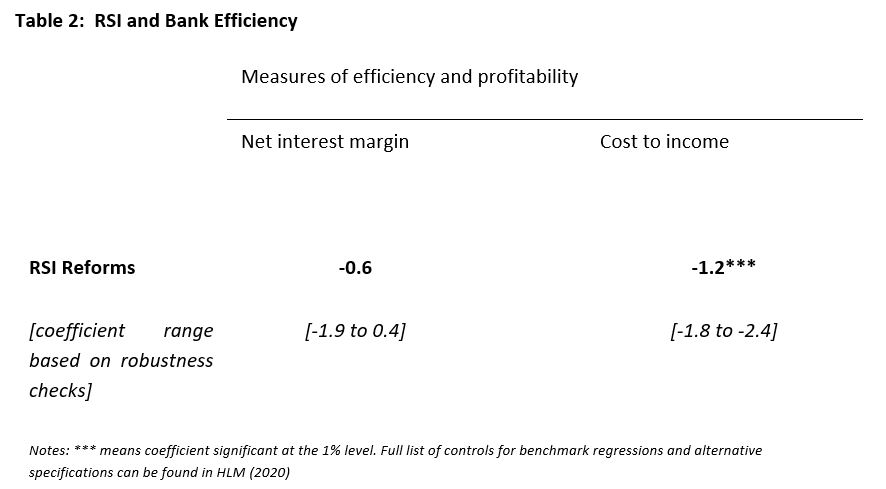