The pros and cons of issuing a Central Bank Digital Currency (CBDC) is currently debated by Norges Bank and other central banks. A CBDC would grant access to the central bank balance sheet to a broader set of economic agents, including for example companies or individuals. How such access would be designed or administered are topics of the discussion. One dimension to consider is the potential impact on the stability of the financial system through the effect of CBDC issuance on bank funding markets. This blog provides an overview on research related to the demand for financial institutions’ funding instruments and derives implications for the issuance of a CBDC. A key message is that CBDC has the potential to substantially crowd out bank funding instruments due to its superior safety features.

CBDC and bank funding instruments as safe and liquid assets

Being a new form of money, CBDC should ideally have two crucial features: CBDC should neither have liquidity risk nor credit risk. As such, it competes for demand with other safe and liquid assets. Depending on the degree of substitutability with these assets, demand for CBDC could be strong and demand for alternative assets could weaken. Figure 1 provides a simplified framework that depicts how the issuance of CBDC could impact other safe and liquid asset markets. The boxes show a classification presented in Golec and Perotti (2017) of assets with almost no liquidity risk and almost no credit risk. 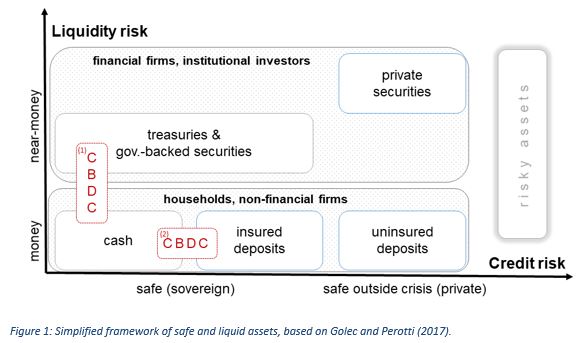 The most liquid and safe asset is cash issued by the central bank. Often equally liquid and therefore similarly considered as money are deposits issued by financial institutions, especially commercial banks. Markets for treasuries, other government-backed securities, and some private securities are very liquid as well and therefore considered as “near-money” assets. These private securities are short-term debt instruments issued by financial institutions, including banks’ wholesale funding instruments.[1] Therefore, if central banks were to issue a new asset in form of a CBDC, the funding possibilities of financial institutions (blue boxes) could be affected.

How a CBDC would fit into this framework depends on the design and features of CBDC. In principle, CBDC would be as safe and liquid as cash. An important feature might be to whom CBDC would be appealing. Consider two scenarios (red boxes) for how CBDC could interact with bank funding sources: (1) a CBDC that appeals to wholesale investors interested in holding near-money assets, and (2) a CBDC that appeals to households interested in holding deposits.

Since the 1980s banks have relied increasingly on wholesale funding instruments, which has led to a surge in the market for privately issued safe debt. Recent literature suggests that investors view sovereign-safe and private-safe assets as substitutes. Gorton et al. (2012) show that the volume of government debt and privately-produced safe assets in the US are strongly negatively correlated. Following up, Krishnamurthy and Vissing-Jørgensen (2015), Greenwood, Hanson, and Stein (2015), Sunderam (2015), Carlson et al. (2016), and Carlson and Wheelock (2018) provide more disaggregated evidence by looking at distinct bank wholesale funding instruments or shadow bank debt securities relative to US treasury supply. They estimate that a one dollar increase in treasuries to GDP substitutes between 9 to 57 cents of private-safe debt.[2]

This crowding-out can happen because government debt has a comparative advantage over privately produced safe debt. There is no risk of a run on government-safe debt. Hence, although equally liquid, government-backed securities are slightly safer than private-safe assets because they offer a guaranteed store of value, even in crisis. This advantage is measured as the safety premium. Krishnamurthy and Vissing-Jørgensen (2012) estimate that US treasuries had on average a 27 basis points safety premium per year from 1926 to 2008.

Assuming that a CBDC would appeal to institutional investors that have a high demand for safe assets, the introduction of CBDC could potentially crowd-out bank wholesale funding. CBDC would enjoy a higher safety premium than bank-issued debt due to the resilience of central banks. Nevertheless, certain features of CBDC could mitigate such a crowding-out scenario. First, CBDC might only be issued against eligible securities, which potentially comprise treasuries and financial sector safe debt. Hence, the introduction of CBDC could itself generate higher demand for financial sector’s safe securities. Second, the remuneration of CBDC is crucial in determining the elasticity of substitution. In as much as CBDC yields will be used as a policy instrument and are not market-driven, they will be a less suitable substitute for wholesale investors. They are interest rate sensitive given their motive to find safe store of value and the abundance of alternative investment opportunities.

The digitalization of payments changed how economic agents want to hold money. Central bank issued cash is being replaced by deposit accounts with payment services. CBDC could be designed to resemble a current account at a commercial bank. Banks could then face an outflow of deposits if households substitute bank deposits for CBDC.

The extent of substitution between CBDC and deposits would depend, among other factors, on the perceived services- and price-differential between a central bank and commercial bank account. For example, if a bank was losing deposits to CBDC, it could increase its deposit rate to attract funds. Estimates (see Molnar, Nagy, and Horvath, 2006; Nakane, Alencar, and Kanczuk, 2006; Adams, Breevort, and Kiser, 2007; Dick, 2008; Ho and Ishii, 2011; Molnar, Violi, and Zhou, 2013; Kuehn, 2018; Wang and Ching, 2019) show that – although there is uncertainty about the quantitative impact – a bank’s market share would increase if the bank offers a higher deposit rate. On the other hand, a bank’s market share would decrease if one of its competitors offers a higher deposit rate.

Besides remuneration, depositors value non-pecuniary benefits, like service quality, and encounter switching costs that tie them to a certain bank (Kiser, 2002; Dick, 2008; Choi and Velasquez, 2018). As a result, deposits are less interest rate sensitive (Amel and Hannan, 1999; Karlan and Zinman, 2018) and offer banks the opportunity of a comparably stable form of funding (Berlin and Mester, 1999; Cornett et al., 2011).

On the one hand, retail investors value non-pecuniary benefits and liquidity services that tie them to their supplier of safe assets. This could indicate low demand from retail investors due to a sluggish adoption of CBDC when they face relevant switching costs. On the other hand, depositors show similar preference as investors in wholesale instruments for government-safe assets over private-safe assets. This preference gains particular strength in crises. The stability of deposit funding in crises depends on the deposit insurance scheme. For example, Lie (2011) found that during the financial crisis depositors in Norway mainly reshuffled uninsured deposits to other banks to keep their total deposits insured. Demand for CBDC as a safe haven could potentially be very high if uninsured deposits are being withdrawn and can be transferred to CBDC accounts at great convenience.

Overall, whether CBDC would be designed to appeal to private or institutional investors, its distinct advantage over bank funding instruments lies in its superior safety. Even in crisis, holdings of CBDC are safe. Demand for CBDC in crisis times could strongly crowd out bank funding sources and aggravate crisis. In normal times, however, demand will depend to a higher degree on the interest rate differential between CBDC and bank instruments. Banks have then the opportunity to attract funds through higher rates or better services. An essential feature for CBDC demand in normal times will hence be how easily accessible CBDC is to either institutional investors or private households.

[2] The comparability of the estimates presented here in a highly condensed format is subject to limitations set by each cited studies’ specific setting. These limitations include among other factors differences in the sample, time period, control variables, estimation method, and regression specification. Estimates should therefore be read with the necessary caution as rough hints at a quantification of the respective elasticities.