Fragmented, not frozen – the Norwegian overnight interbank market after the Lehman failure

The bankruptcy of the US investment bank Lehman Brothers about 10 years ago severely stressed interbank markets across the world (Gjedrem (2008), BIS (2009)). Interbank interest rates increased substantially as Figure 1 indicates and many banks were either denied loans or rationed when borrowing from other banks.

To meet banks’ liquidity demand, lower interbank rates and normalise interbank lending, central banks undertook several extraordinary measures (Gjedrem (2009), BIS (2008)). In particular, they provided generous amounts of liquidity at concessionary terms to banks in their domains; an overview of Norges Bank’s actions during the autumn of 2008 is available here.

We shed light on how the Norwegian (unsecured) overnight interbank market evolved in months before and after the Lehman bankruptcy on 15 September 2008, using hitherto unused data of interbank transactions and improved analytical tools. In our daily data, we do not find evidence of the overnight interbank market for NOK liquidity “freezing” or “breaking down” on 15 September or on any of the days afterwards. However, we document large disparities between banks in their experience of the market stress following the Lehman failure. Our findings are largely aligned with studies of international interbank markets including Afonso, Kovner and Schoar (2010) and Abbassi et al (2015).

How do we know?

Banks borrow overnight in the interbank market to ensure they can meet their immediate liquidity needs. Information about individual interbank loans has not been subject to reporting and hence there is limited, if any, publicly available information about the size, interest rates and counterparties of individual loans. Such information can, however, be gleaned from settlement data of central banks with fairly high confidence. Interbank loans and repayments settle over the respective banks’ accounts at central banks. Researchers have developed so called ‘Furfine filters’ based on e.g. Furfine (2001) that scan through transaction registries of settlement systems and identify payments that may relate to overnight lending between banks.

We have adapted a ‘Furfine filter’ to Norges Bank’s settlement system and found that it gives highly reliable information about counterparties, interest rates, and values of unsecured overnight interbank loans; see Akram, Fevolden and Smith (2018).  We use this filter to comb through settlement data from Norges Bank and shed light on the Norwegian unsecured overnight interbank market three months before and after the collapse of Lehman Brothers.

Unsecured interbank lending occurs mostly at short maturities. While the unsecured overnight market is an important venue for obtaining NOK liquidity, it is not the dominant one. Banks also borrow and exchange foreign currencies to NOK for short or long maturities while hedging for exchange rate risk. Lack of data prevents us from shedding light on how this market was affected by the Lehman failure.

What do we find? Divergence in interest rates and interbank activity across banks

Our five main findings are as follows: 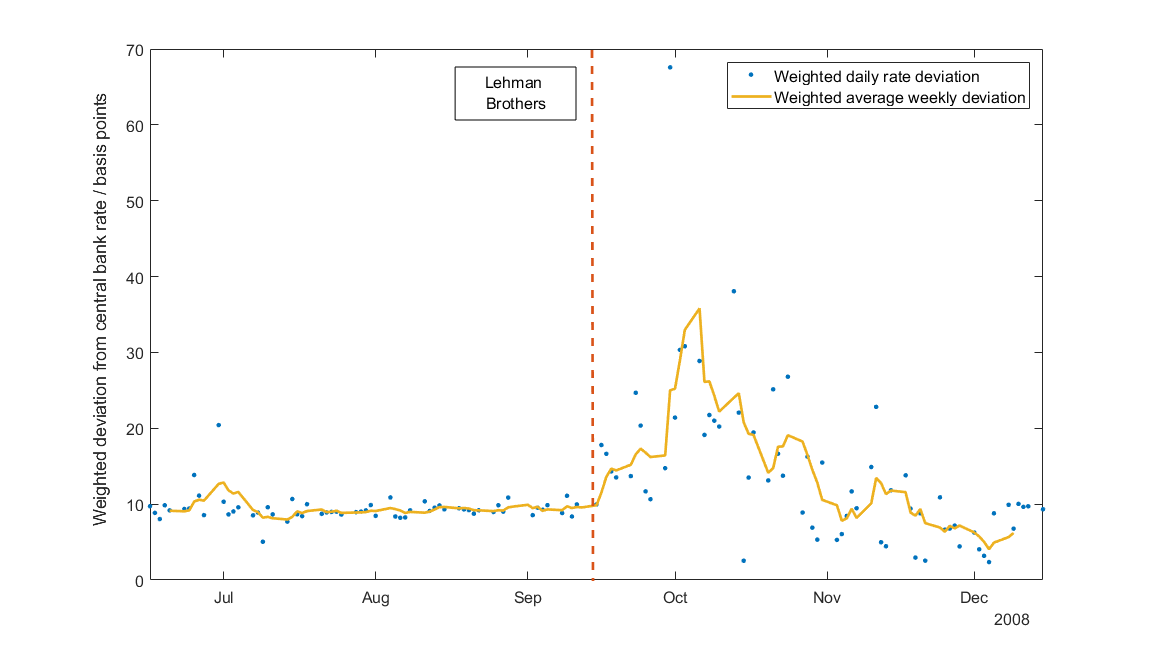 While the weekly average spread was about 10 basis points during the three months leading up to 15 September, it gradually increased to around 35 basis points by early October. Afterwards, it declined towards its levels before mid-September displaying large daily fluctuations in contrast with its relatively stable values during the three months period prior to the Lehman default. The gradual and relatively muted increase in the overnight interest rate spread is in contrast with the NIBOR spread, which increased by more than 200 basis points by early October; see Figure 1.

Second, overnight interbank interest rates diverged widely across banks after mid-September. Figure 3 shows loan-weighted weekly averages of interest rates agreed between large and medium-sized banks. Here, large banks belong to Group 1 banks while medium-sized banks belong to Group 2 banks as categorised by Norges Bank.  Figure 3 shows that overnight interest rates associated with loans between and in-between the two bank categories were close to each other before mid-September, but started diverging afterwards, with the divergence reaching its highest in October. 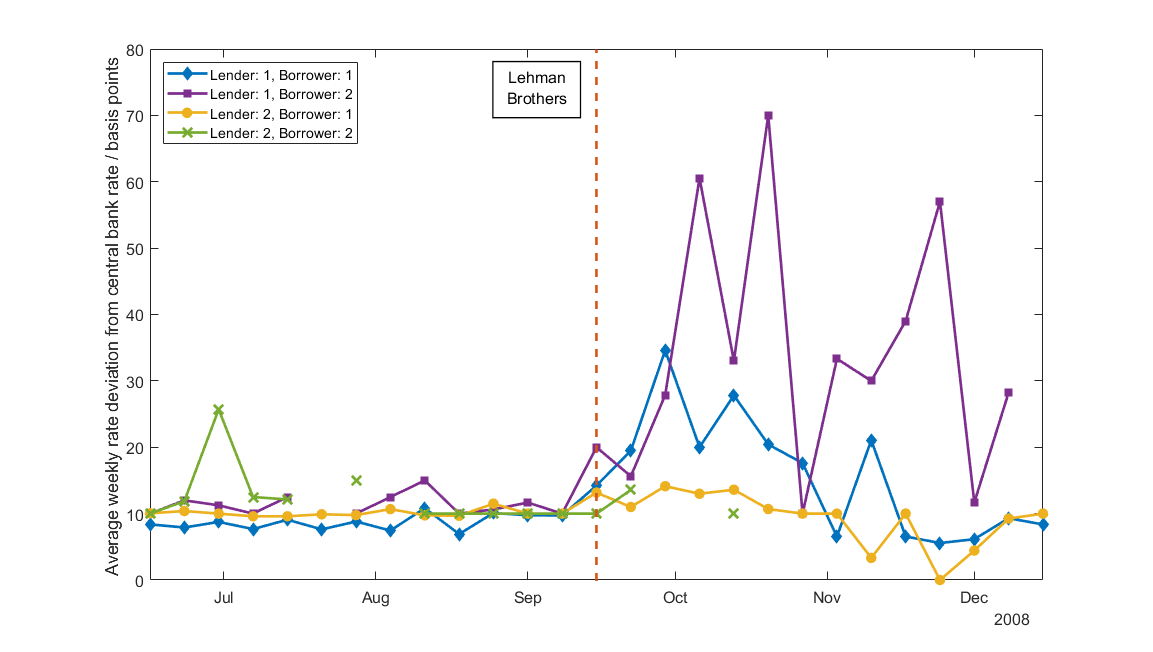 Turning to participation in the overnight interbank market, our third key finding is that while the number of overnight market participants remained about the same as before Lehman’s failing, market activity measured both by the number and value of transactions declined after mid-September. Yet, the decline in market activity overall was rather modest. 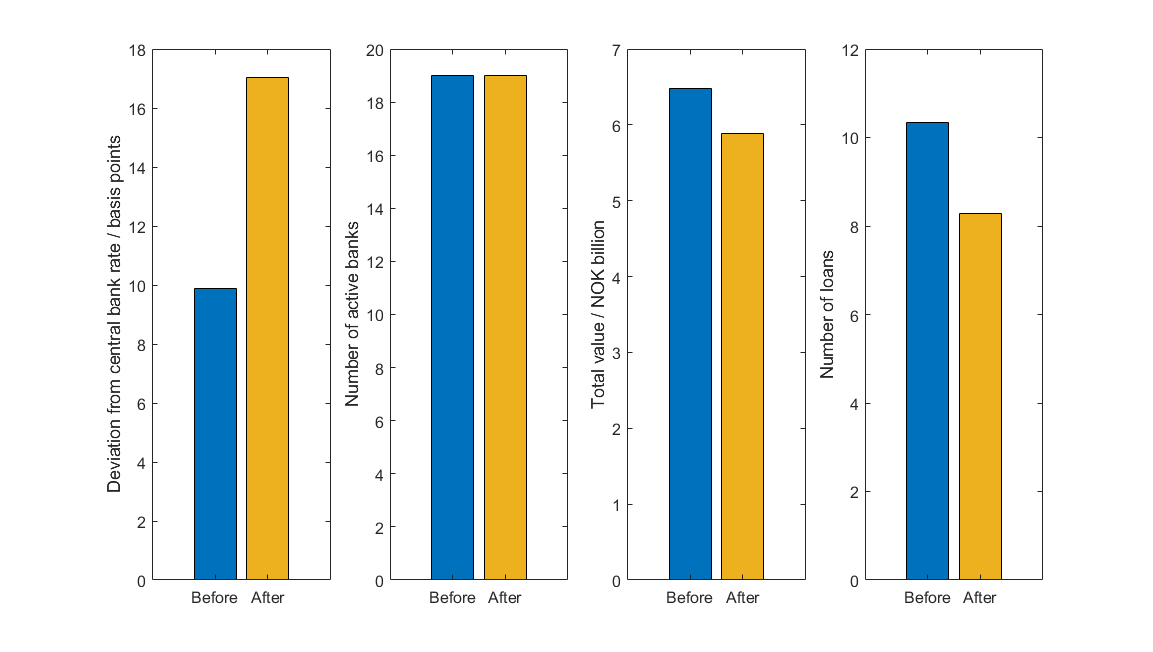 Figure 4 shows that the number of active market participants during the three-month periods before and after mid-September was identical (19). The average of total values transacted daily in the three months after mid-September fell by 9 percent compared to the average level three months before mid-September. The daily average number of loans went down from 10 to eight over these periods. (Interbank activity has increased since then, especially after the shift in Norges Bank liquidity policy in October 2011 (Akram and Findreng (2017).) 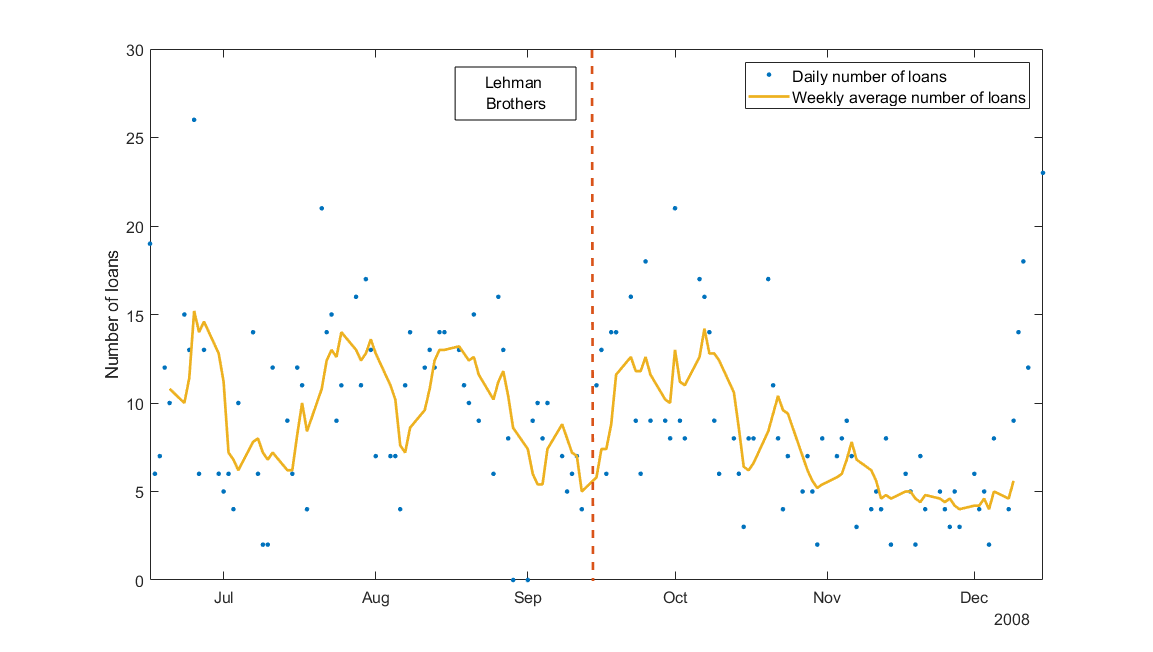 Aggregate numbers such as those in Figures 4 and 5 mask substantial differences between banks in terms of their market activity. Our fifth finding is that there occurred substantial changes in the composition of market participants as lenders as well as borrowers. Notably, the shares of large banks as both lenders and borrowers increased after mid-September. 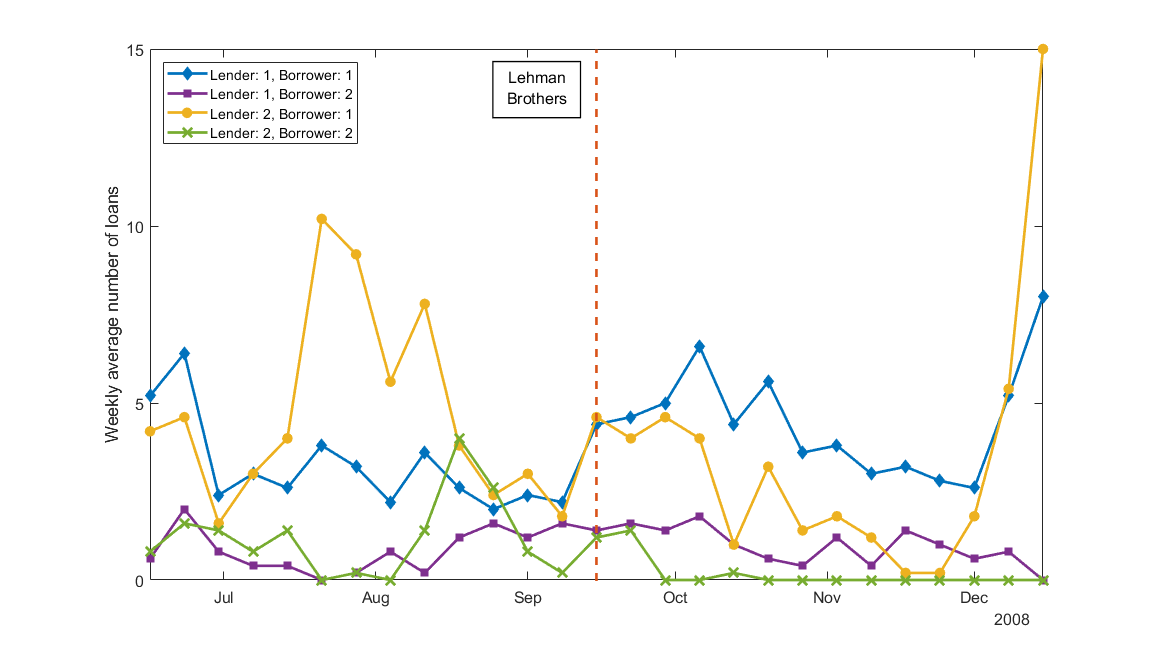 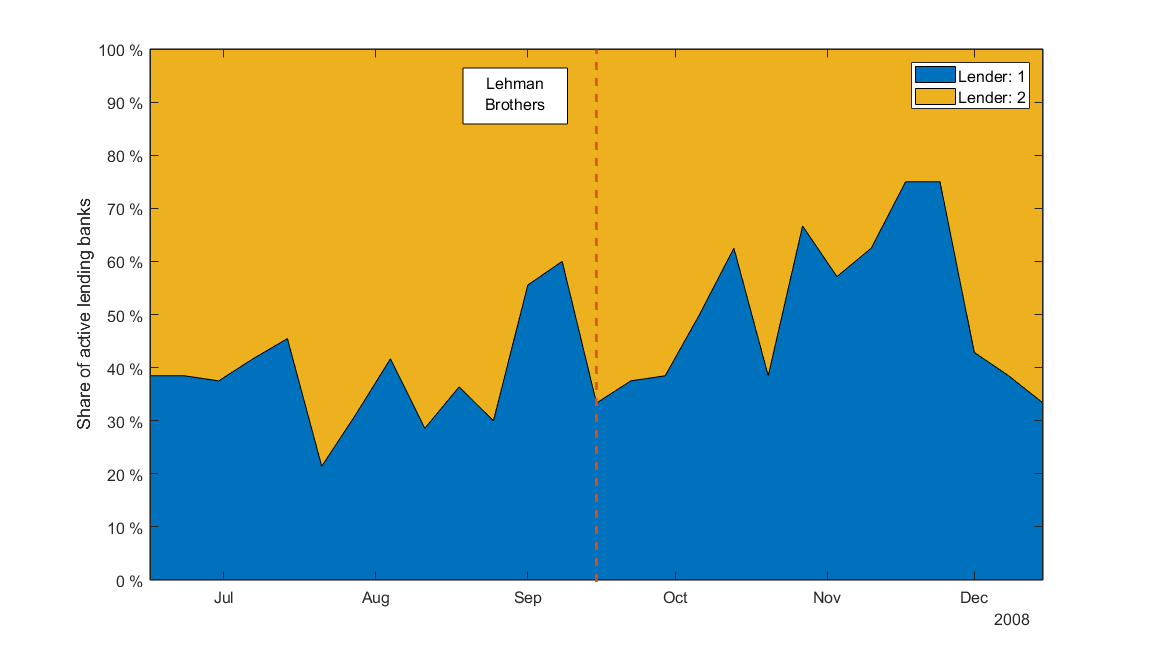 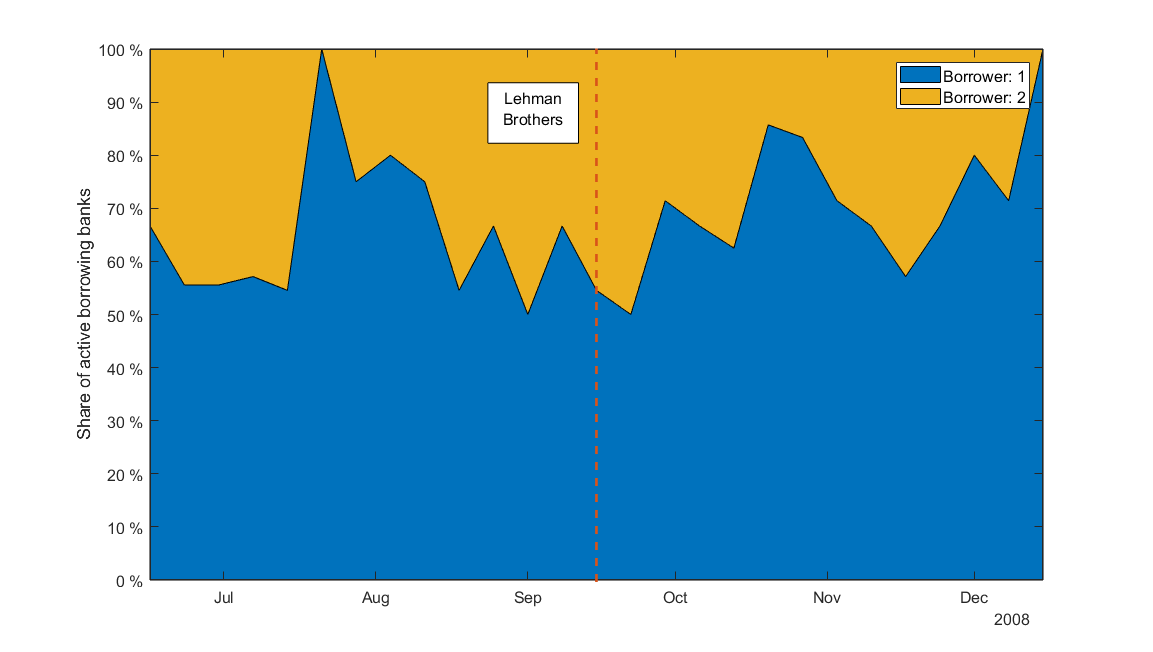 The Norwegian unsecured overnight interbank market continued to operate in the aftermath of the Lehman failure. Overnight interest rate spreads increased, though substantially less than market reference rates such as NIBOR. Moreover, overall interbank trading remained at levels not far below those before the Lehman bankruptcy. The overall interest rates as well as trading indicators, however, mask substantial differences across banks regarding interest rates and interbank lending and borrowing.