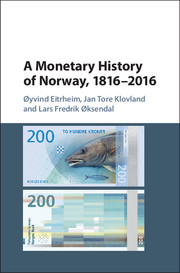 More about the book

The monetary system had to be reconstructed after the Napoleonic Wars. The establishment of Norges Bank played a key role in the work to build up confidence in the payment system and monetary stability. The Norwegian private banking system went through a period of rapid expansion and an effective payment system saw the light of day. Norges Bank evolved from being the country's note-issuing institution into a modern central bank.

The book is amply illustrated using charts that shed light on the Norway's monetary history through 200 years supported by data from Norges Bank's Historical Monetary Statistics.

The book is published by Cambridge University Press, and can be purchased at Cambridge Books Online.

This book is one of four books published in conjunction with Norges Bank's bicentenary.

On Thursday 16 June 2016 the book "Central Banks at a Crossroads. What Can We Learn from History?" was launched. The book is published by Cambridge University Press and is aimed at an international audience of professionals.

Today the book "A Monetary History of Norway 1816-2016" is being launched. This book is also published by Cambridge University Press and is aimed at international audience of professionals.